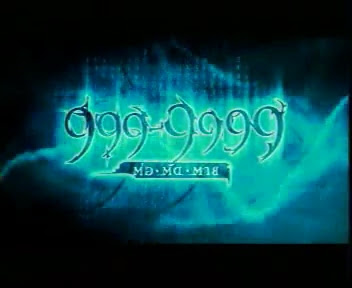 You got to hand it to Asian slashers. They know how to make it weird!

While not scaring us with long haired ghosts and cursed objects, they make good by borrowing every little element that makes a slasher film entertaining when it comes to their own stalk and hack films, all the while adding a few flavors of their own. So when Final Destination became a major hit, Thailand tries to do their own killer-less killer movie, which results to this ankle-biter.

Rainbow is a newcomer to an international highschool in Southern Thailand and gets recruited by a local gang of pranksters and "daredevils" after finding out that she's somehow connected to the controversial and very mysterious death of a school girl found impaled on a flagpole. During her initiation, she tells them of an old urban legend about a certain number - 999-9999 - that grants one wish to whoever manage to call it at the stroke of midnight. She, however, warns them of its drawbacks, mainly about being killed off by the time their wishes are granted, but her new classmates decide to try it out anyway.

As you guessed it, Rainbow was right and her friends' wishes starts to get granted one by one before Death, or something equally supernatural, comes for them through a series of bizarre accidents. It's only a matter of time before they're all killed unless they figure out a way to stop "999"...

I see this film to be more of a twisted and obviously more supernatural take on the Final Destination movies, poking fun at the mishaps of fun-loving teenagers who just wanted to try out something "daring", dying through Goldberg-influenced murder-set-pieces. It's half the fun of watching a really bad rip-off, especially something as cheesy, outlandish and laughably corny as the script of 999. It's generically funny for that matter but that didn't stop the film on restraining some gory deaths as well as adding in some touch of Asian horror at some extent. (It's more of your standard American Slasher film than one of the many RING clones as some may say)

It's a fun film, I have to say, even if it's hardly passes as a "good" horror film; the plot's generic and you can see a lot of things coming from afar, Even so, if cheap thrills please you and cheesy delight harbors the very joy of your world, then you got my word on this small-time pro. Recommended for all cheesy slasher fans!

Bodycount:
1 female found impaled to a flagpole
1 male had his throat slashed by metal shard inside a car wash
1 female killed offcamera after being snared by a crane hook
1 male immolated by freak gas leak accident
1 male eviscerated against shards from a broken window ledge, disemboweled as he falls to his death
1 female gets a flying buzzsaw slicing her head in half
1 male lands on a pipe, impaled
Total: 7
Posted by Kaijinu at 4:17 PM