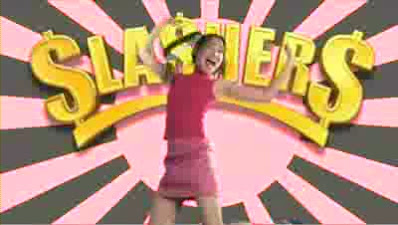 My admiration for Maurice Deveraux is limitless. His determination to entertain and shock us has been very admiring to me, since he always does it with very little budget to go by. He knows horror. He knows entertainment. He knows what makes a slasher movie fun.

Due to positive feedback, Japan's hottest, funnest, most controversial reality game show $LA$HER$ is having its first All-American contestants, composed of three men and three women from the States. The goal of the game is to go through and finish a maze full of hidden passages and special rooms, while trying to avoid three randomly selected killers. If they get you, they'll kill you...for real. If our contestants do manage to survive the maze, there's a million dollar prize money waiting for them.

Made as a one-take shot parodying crazy Japanese gameshows, $LA$HER$ provides one of the more unique and very entertaining slasher plot to earn a cult-status. It's a commentary of sorts on reality game shows and how silly the concept was to begin with, as well as the classic dangers of television and televised violence for the sake of ratings, sponsors and wealth. It's a premise fated to be parodied and done so already with the likes of films like The Running Man (1987), though this title offers a clever and creative use of its limited budget, as well as camera skills as the one-take runaround done for this movie looks fluid with invisible edits and proper timing. This, however, meant a few drama along the way as the movie takes its time developing its characters and motives before the good stuff happens, but the wait's worth it when grue humor, juicy kills and panache gets to be our reward for sticking around.

And true enough, the torch holders of this movie are its slashers, a creative blending of the popular tropes as we get deranged undead Bible thumper "Preacherman" who pays tribute to religious cult slashers; Chainsaw Charlie, a stereotyped chainsaw weilding hillbilly bumpkin sporting an Alfred Neuman mask; and, lastly, Dr. Ripper, PHD, a deranged medical man in the vein of fellers like "Dr. Giggles". They're hired to wreck havoc, taunt and kill one contestant at a time and will go berserk once they're unmask. Tis' the rules and they're sticking to it, even if it costs them their own lives. (now that's dedication to entertainment!)
Preacherman is, sadly, underused as he didn't even get the chance to kill anyone and he's also, spoilers, the first to go. Fan favorite Chainsaw Charlie, however, earns his status with a funny and in-character performance with his psuedo-innocent wild persona, chuckling his way slicing pretty folks. Dr. Ripper, the main course of the game, never really peaked my interest that much as I never find him that interesting, his tendency to get carried away with his teasing borderlines being annoying and his design looks rush.

The show did have a wide array of killers shown during this film's opening number, including a clown, a pirate and some Chinese dude. I would have paid a lot to see them use the Pirate slasher or even the clown, but I guess a killer pastor and a chainsaw-loving country boy would do just the same.

$LA$HER$ , as most low-budget horror film do, have it's little flaws around its production like, for instance, some of the gore effects looking pretty fake as you can tell that's a dummy one character is stabbing or hacking to bits. Not to mention some very cheesy background tunes to go with the action, bitter acting from the the casts playing the contestants and some cheap jump scares. For a Direct-to-video feature, it doesn't really try harder to push itself and "get out there" when it comes to gore, instead sticking with B-movie fares and tricks. And yet, here I am still loving the hell out of this movie, so I guess not that big of a dent.

A cheesy and bloody psuedo-snuff that's made just for the sole purpose of entertaining, this film isn't going to appease everyone but it will for the right audience. This is perhaps the most honest slasher movie I've seen and I deeply appreciate that. Highly recommended for cheese fans and fellow bodycount fanatics who are eyeing for something slightly unique.