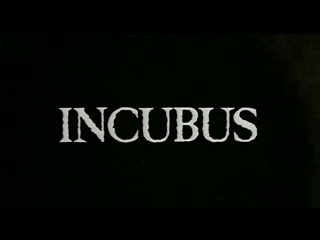 Dr. Sam Cordell and his daughter Jenny moved to a small New England town called Galen, which is currently being plagued by a string of violent murders and rapes. As he checked on one of the surviving victims, he is baffled not only by the violent nature of the attacks but also the physical evidences the attacker leaves on his victims.

It's not too long before another woman was raped, this time not so lucky as the assault brutally kills her. Now with the authorities hunting down the madman, Cordell, along with his daughter and a female reporter, Laura Kincaid decided to join in the investigation in hopes of giving them some insights on the attacks and stop the rapist before he kills again.

As a slasher, Incubus took a different approach to its murders as they are shocking, disturbing and often brutal in a misogynistic tone; male victims got the more conventional murders while the females were prejudiced through savage rapes, which were quite violent even if don't get to see the attacker, and instead focuses on the full horrified faces of our victims. Through this, Incubus managed to tap into our primal fear and made the entire run darker and gloomier than the fromage-flaired teen-kill flicks of its era.

Interestingly, Incubus tried to play around with the true nature of the killer though its quite obvious that they're supernatural, hinted as early as the first rape. Indeed no mortal man can rape that savagely with very little strain. Still, it didn't stop the movie from attempting to put some ambiguity on the killer, which soon led to the time we learn of the non-human nature of our killer at the end with a fairly sullen and mournful twist.

With it's lack of gore, Incubus makes up for the lost with a chilling story and an emotional wreck of a slasher film. Just hearing what the demon had done is enough to make me wince. While it certainly will not cater to all slasher fans, especially those who prefer a less sillier and/or sleazy bodycounter, the film caters to its right audience with a strange nightmarish situation, great use of verbal description, and some hint of cheese. Chilling stuff indeed.