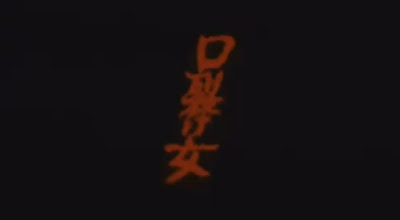 Since most J-horror films concern curses, long-haired women, and haunting, Japanese slashers can be considered a rare breed. Perhaps it goes with the culture, but as far as I can tell, we only have a few titles under this subgenre hailing all the way from Japan, with Evil Dead Trap (1988) being the most popular as not only it came out during the last half of the 80s but it also featured some juicy killings and one really weird twist, as well as the likes of Yoroi The Samurai Zombie (2008), Black Rat (2010), Takashi Miike's 2012 dead teenager epic Lesson Of The Evil, and, to some extent, Battle Royale (2001).

Carved (2007) is one of these little entries and one that gained enough fans to be considered a cult favorite; it is based on a popular Japanese Urban Legend known as the Slit-Mouth Woman, an apparition who appears to individuals (mostly children) that are walking alone at night, asking them if she's pretty. Answer No, she kills them. Answer Yes, she'll take off her mask, revealing a Glasgow scar that sliced her cheek to a wide maw and ask the same question again. Whether they say Yes or No, she'll kill them either way.

Interestingly, this legend was only mentioned around the beginning and became no more than a red herring once she begins to make her presence known to the characters. In Carved (2007), an earthquake strikes a small town and destroys a sealed closet that appears to be keeping the malevolent spirit of the Slit-Mouth Woman. Now free to roam the streets may it be day or night, she prowls for children to kidnap and torture to death, which sets the entire town into panic; it appears that the only people who can stop her is a couple of school teachers, Kyoko and Noboru, who may harbor their own little secrets and dark pasts.

Mixing Asian horror elements of vengeful ghosts with the cliches of the western slasher film, Carved is an oddball chill-fest with a disturbing amount of child abuse and murder. For one, the Slit-Mouth Woman made it clear that she's only after children, ignoring any bypassing adults that sees her or tried to stop her from doing her torturous deeds on the youngins'. This is a rather unique approach for a slasher villainess and one that deserves some notoriety as child murder is a taboo that not a lot of slasher movies dare to venture on. (Freddy Krueger of the Nightmare on Elm Street franchise nearly did but the studio had their way and he ended up killing teenagers, mind you)

That said, I came to like the fact that the Slit-Mouth Woman here is an entity separate from the legend as she is given a rather dark origin and a unique ability to become "real" by possessing a living woman. As a slasher, her kill count is dry on blood and kinda low on the count despite her abilities to materialize anytime, as well as the cool weapon she wields. But to make up for this, she has a torturous streak that covers new levels of unpleasantness seeing how young her victims are, thus making Carved (2007) a shocking movie for a whole lot of reasons different from your standard bodycount film.

Unfortunately, this is where the film gets it's flaw; though it is easy to buy the Slit-Mouth Woman harming these children since she's the monster of the movie, I failed to see the need to make most of the mothers featured here as equally abusive or mistreating as her. I believe this was an attempt to supernaturally link her to these horrid women, but this red herring never really went anywhere and ended up as nothing more than a mean-spirited detail.

Nevertheless, redeeming this flaw is the film's steady direction and the ever popular Asian horror trope of moody atmosphere. I like how grained the picture looks as it gives the plot a timeless and sullen feel, and how the casts play their role with working grit despite the modest looking budget. Carved (2007) never was high on the special effects save that one scene where we get to see the Slit-Mouth Woman's maw opened wide, but seeing how story-driven the film is, this is hardly a loss and it is impressive production-wise.

While it may not be the bloodiest or intense slasher-horror to come out of Japan, Carved (2007) made itself work as a chilling tale with a shocking premise. If you are easily upset with the context of child abuse then this is a tough movie to sit through and I suggest be wary about it. Otherwise, I suggest seeing this film back-to-back with 2008's Baby Blues if you are up for a disturbing night!