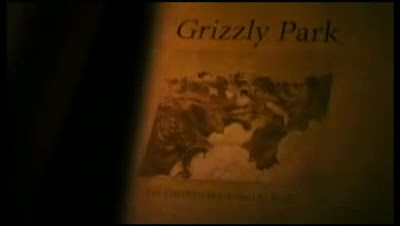 A Straight-to-DVD slasher featuring (as the title suggests) a bear killing off people in the woods one by one. Last I've seen a "grizzly bear slasher" was that enjoyable cheese-fest of a killer animal flick called "Grizzly (1976)". Could this be a possible contender for said 70s Jaws- rip off?

Not a lot in sense of plotting as we simply follow even hooligans getting a chance to reflect on their actions through a rehabilitation program in the woods, all the while a grizzly bear just so happens to be around, munching on escaped serial killers before setting its teeth on the unwitting teens. It is literally just that and though I love down-to-basic slasher flicks, Grizzly Park bears some of the more annoying modern slasher tropes that kept me from liking it further.

For one, not a single character here is likable enough to root for. I can overlook bad acting and cheesy scripts, but to set up unlikable douches for the killcount just felt like cheating since, the last I heard, slasher flicks were supposed to make us feel scared for the victims. I understand that times have changed but it's pointless to watch these dummkopfs and feel frightened for then if all they talk about is obnoxious lives, manipulating us into just wishing someone, or something, will end this. There's little suspense in turn, no (working) comedy, and no character development whatsoever. Grizzly Park's a hollow slasher and none of the good stuff happen until the last third!

The only reason why I couldn't fully diss the film is because I was entertained at some point; the murders, while some went to the obvious cheats (offscreen mauling, cut-aways), did feature some decent gore and a few creative ones. They're nothing outlandish, but very passable for a corny movie. There's also a decent twist in the end that isn't that big of a game changer either, but good nonetheless.

Grizzly Park may be almost horrible, but I can see a lot of openings for improvement. A better script might just did the trick but if not, they could have always splashed it with some crazier gore. But it looks like we are stuck with this one and while I may suggest for you guys ton avoid it, it will, of course, fall on whether you want to see this dreck for yourself or not...