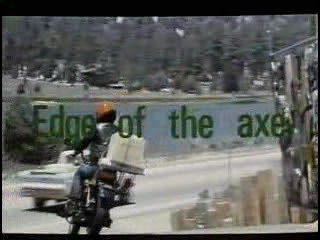 In a small town called Paddock County, a violent masked murderer had gone axe-happy on the towns people. The police are left clueless as much as they try to deny the fact that a serial slasher is on the loose, the growing bodycount made it too ovcious otherwise.  All the while, two young lovers are caught in this nightmare, and soon, an all-too-terrifying truth comes between them...

It's a little better than your standard slasher film, but it's nowhere the best; Edge of the Axe is rather formulaic and lacked some decent gore, all the while holding a few surprises of its own. A beautifully shot setting and some interesting plot points did made this easy stroll digestible, and the murders, though tame, are still passable by my standards thanks to an intense build-up and set-pieces.

The mystery itself is the movie's strongest point, as believable and well-acted red herrings are littered for the story and it's paced well enough to keep it engaging and have its audience guessing until the end. (Though, the ending might be a little let-down. Still good, though.).

If it only wasn't limited by it's budget, Edge of the Axe could have benefited with some added touches of blood and grue, but as a final product, it passes above the average of your standard hackings and give us some worthwhile turns from the usual.