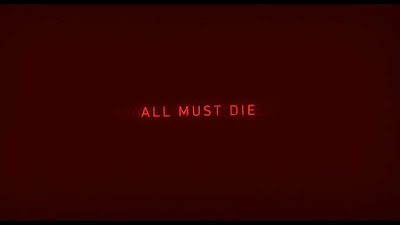 With just a few days away from getting hitched, Gina finds herself "kidnapped" and driven all the way to a rented country house in the woods by her friends for a horror-themed bachelorette party, complete with a creepy scavenger game where she has to wander around and find clues to get to a prize. In the midst of the drinking, skinny dipping and campfire confessionals, something appears to be bugging Gina regarding the whole shebang as the more the night goes forth, the stranger and more concerning her party becomes, particularly when someone literally wearing her face starts swinging an axe at her.

All Must Die (2019) is one of those movies that tries to be more than what it is at face value; with its anxious pacing and direction, the film is at an aim to be a psychological thriller of simplistic proportions and, to the movie's credit, it does succeed at building up to the macabre latter act with much sullen and uncertain tone until the reveal, giving us some time to work ourselves around our casts. The drawback, however, is that said reveal was anything new, so much so that you could actually piece it together quite early through how some of the characters react to everything that's happening, even more when the fairly bloody and chunky bodycount starts piling up on screen.

The film in turn, as much as it tries leaning off from the dead-partyers-in-the-woods deal, still suffers from a generic cookie-cutter mystery plotting plenty of B-grade slashers suffer from, but it does have that decent production flair and alright acting going for itself so those with a knack for simple backwoods psycho-drama could still get a kick out of film so long as they're not looking for high remarks.