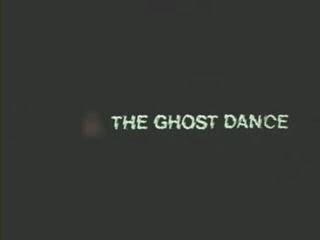 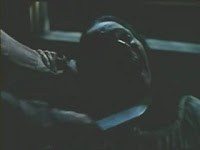 One Dr. Kay Foster and her boyfriend, a former Native named Tom, supervises the excavation of a tomb belonging to N'halla, a shaman who once try to fend off white men by starting his own religion that revolved around murders, torture, and brainwashing white women into being his wives. As artifacts and mummified bodies are taken out for her study and discuss with her class, little Kay and her boy-toy knew somebody else had taken interest to their dig. 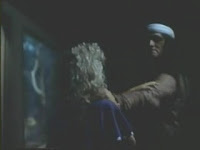 At nightfall, a medicine man sneaks in the digging site and, after killing a guard with a "snake-in-a-box", steals a few artifacts that will summon a dead man's spirit and inherit its powers. After a trippy possession sequence, the spirit of N'halla took control of the medicine man to continue his spree, picking off a few locals and soon anybody else who got in the way as he travels to the university where his original mummified body was brought to.

Like most Native based slasher movies, The Ghost Dance tends to focus on the supernatural or religious aspects of its subject before treating us with bloody delights; here, the film shifts from possession story to murder mystery before finally going full slasher on us, managing to keep the story interesting despite some slow scenes. 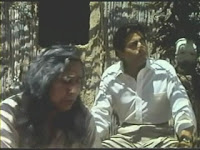 Due to this, the film is mostly story driven and what I came to appreciate about this film is that its scripting fleshed out its two main leads quite effectively; Julie Amato's Dr. Foster character is a true authority who never lost her cool even if the undead shaman starts appearing in a ghostly fashion. The character Tom Eagle, played by Victor Mohica, also had an interesting development as a skeptic who lost his faith after seeing a ritual gone wrong, but soon to be challenged spiritually when the supernatural threatens his loved one. The bond between these two kept this movie away from slasher mediocrity, focusing more on a stable characterization rather than having them as easy throwaways. 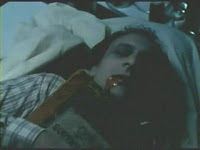 The murders themselves are okay; while very few were creative and not all were uber gory, they're still juicy and acceptable especially if its goes along with some intense stalk scenes and imaginative build, like how our killer can transform into animals to attack his victims or as an eerie ghostly figure which worked well with the film's simple yet creative cinematography.

(note: In a flashback, a boy had his gut forced open by a medicine man and appears to be disemboweled. Though the medicine man claims it was a medical procedure, its unknown whether the boy survived the ritual or not.)
Posted by Kaijinu at 8:30 PM