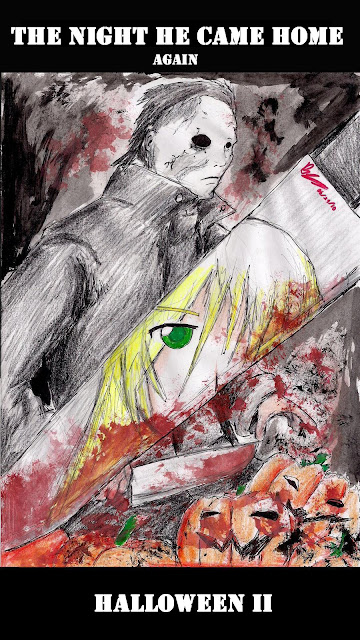 Welcome, welcome all, for the day is here.
Come on, come on and let's all hear!
The Shape is back, and he's still alive
In this Halloween night, who will survive?! 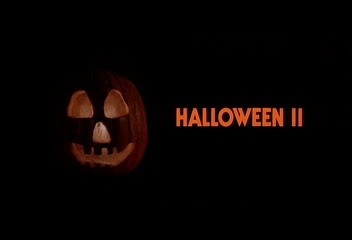 Recapping the last time we've seen Michael Myers terrorize a hapless babysitter and the two children she's looking after, he was shot six times by his own Psychiatrist-turned-witch hunter Dr. Loomis before plunging out of the window. But when Loomis looked out, he saw no body, thus showing Michael Myers is still alive, evil on two legs running amuck on that Halloween night...
With the whole neighborhood alarmed of the murders, the once quiet town of Haddonfield is now littered with cops searching for the masked madman responsible and likely still out for blood. Stealing a new knife and killing a few who got in his way, Myers roams the town until he finds out that his surviving victim, Laurie Strode, was taken to a nearby hospital. Intending to finish what he started, Michael proceeds to the place and depopulates it one staff at a time, all the while Loomis continues his hunt for the maniac.

Now, fun fact, this is actually the very first Halloween movie I saw and the very first slasher film I caught a glimpse at; I was just a toddler when I saw the burning climax of this film and I was at grade school when I first watched this as a whole. This said, it's no surprise that Halloween II has a special place for me, even more when puberty hits and an older sense of appreciation kicked in.

While Rick Rosenthal directed the film, John Carpenter shot a few "gore scenes" to keep the film up with the splatter-happy audiences of the 80s as such movies like Anthropophagus (1980) or The Driller Killer (1979) were exciting young movie goers with gore, the tamed kills of the original might not be as successful as it was back then. True enough, the murders are bloodier than the original but, in turn, lost so many of the creepiness of the first and seems a little exploited seeing some of the nastier and longer killings were done to female victims. Add the fact that Laurie spent most of the time confide to her bed and Loomis going around town looking for clues to Myer's current whereabouts, leaving Michael more screentime makes me wonder if they were trying to market The Shape as an iconic slasher as early as then.

Then again, if you are to see this without thinking about its context that much, Halloween II is not all bad. As a slasher, it definitely delivered some good kills which are quite plentiful including an impacted hammer claw to the head, a victim drained of blood, and a nurse impaled and lifted with a scalpel. (once again showing how non-human Myers is) Some intended closure was also included here to supposedly explain why exactly Michael went back to town, albeit not a very good one; apparently, Laurie Strode is Michael's younger sister and seeing he did murdered his eldest before being taken away to be (unsuccessfully) treated, the movie tries to settle in the fact that he's simply coming back to finish the job. This, unfortunately, didn't answer why exactly was he killing them to begin with or how he figured out that who she was since he never even saw her grew up with him.

The reason for this closure was that John Carpenter planned to conclude Myers' reign here, with a fiery end of all ends as both the Shape and Loomis would supposedly burn to their deaths. This was to allow him start another Halloween movie but with a different plot, as seen in Halloween III: Season of the Witch (1982). Unfortunately, the idea flopped for that time and fans of the slasher hit will have to wait until the latter half of the 80s before the other Michael Myers sequels happened.

Until then, we bid Myers a warm...er, blazing goodbye for the night, so thus ending the first of many sequels to be made. As far as slasher seconds go, this is very acceptable, just as acceptable as Jason's first feature in Friday the 13th Part 2 (1981) and of Leatherface's louder rampage in Texas Chainsaw Massacre Part 2 (1986). Flawed or not, Michael had truly given more of the night he came home...

Bodycount :
1 female had her throat stabbed with a knife
1 male accidentally crushed in a car collision, immolated
1 male gets a hammer claw to the head
1 male strangled with a cord
1 female had her head repeatedly dunked and scalded into boiling water
1 male found with a syringe to his eye
1 female gets a syringe full of air to temple
1 female bled to death (offscreen)
1 female stabbed and lifted with a scalpel to the back
1 male had his throat sliced with a scalpel
Total: 10
Posted by Kaijinu at 2:16 PM