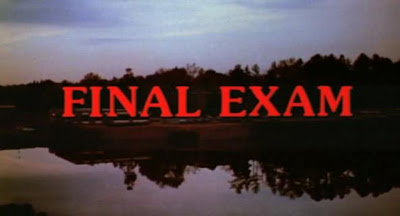 I'll keep this review short and quick since there's not much to talk about this movie except the fact that nothing should stop you from seeing this worthwhile underrated slasher flick. 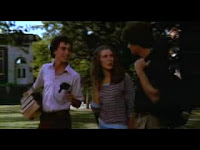 It opens with a double murder of a teen couple sitting on their parked car next a lake; a random loon literally just jumps into the scene, knife clenched at one hand, and starts stabbing them to death. Said crime makes its way as news to a nearby campus, wherein its students discuss it, all the while studying for exams or worrying about their fraternity initiation. Of course, none of them seems to notice the mysterious black van strolling by, but after a prank involving a fake high school shoot-out just so the perpetrators can skip out on a final exam, the kids here can definitely kiss goodbye for any outside help since the cops aren't gonna buy any more calls from them. Cue in the one night our killer decided to show up and murder a bunch, and you get yourself a movie like any other of its kin. 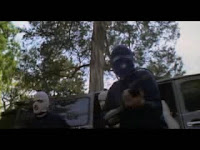 That said, Final Exam lacks much of any unusual surprises save, of course, our killer being a completely random loon and the film spends the first hour with a plot similar to a campus comedy with slice-of-life bits, focusing on just about anyone from prankster jocks to scholar sweethearts. When our loon begins to murder them one by one, gore hounds will meet a bit of disappointment since our murders are simplified into simple stabbings, mind you too. 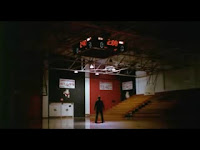 Not that I'm complaining, of course; despite the lack of any real horror action around the first hour, the film is still watchable as you get to know the characters more, whether you hate them or not, making them less than your average meat. The build-up made it good and worthwhile as the simplicity of the flow have the latter massacre genuinely frightening as it happens completely out of random, hardly any characters seeing it coming. The last few minutes where our virginal final girl pits herself against a green-shirted killer also made it as one of my few favorite chase scenes in the slasher sub-genre as they went on it at a flight of stairs, with the killer catching on no sooner.

I'm really surprised on how good this movie actually is and while it is often dismissed as a Halloween (1978) clone, (which is true in a way) Final Exam still makes a great addition to any slasher completist or for fans of obscure low-budget fright flicks. A must own!