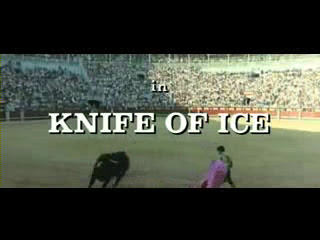 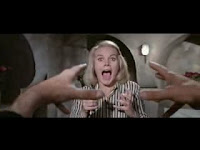 Stricken mute after a traumatizing incident involving a train wreck that took the lives of her parents years ago, Martha Caldwell is living happily with her uncle in Spain. But when her cousin met a grisly end at the tip of a knife, Martha finds herself targeted by a skulking Satanist who appears to be murdering women for his lord. Little do they know however, the serial killer is the least of their problems. 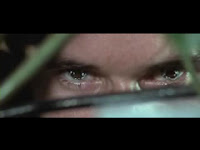 Intriguing and very twisted, Knife of Ice took a rather different tone on the usual Giallo fare whilst the Italian thriller genre is known for its sleaze and fancy take on murder, Knife of Ice is tamer, in terms of both sex and violence, and gave a higher emphasis on the mystery and the plot twists, which can be told from the fact that the murders all occurred off camera and the absence of a single nude body help made the film more grueling, intimidating, and focused, a good execution as the story really offered a lot of thrills as each character can be suspected for possible ulterior motives. 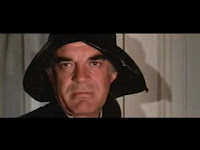 While the blame does go to a local hippy who practices Satanism, we can't help but think that somebody else is behind these murders for his appearance is all too convenient. True enough, it boils down to a clever twist is placed in the end, tying all loose ends and revealing a shocking truth about the murders.

While the overall total of murders are not exactly big, which might disappoint some who are looking for cheap, bloody thrills, the film showcased a rather classy and artistic look. In its cinematography, the playful shots are rather effective, including that of a woman looking something inside her car while a gloved hand, knife wielded, is seen on a reflection from the inside. The actors had put up a fine performance, too; Carroll Baker plays our mute lead, which in turn had to express all of her fears and frustrations are the crimes began to circulate into her life.

For a rather basic running time, the film also held its decent pace pretty well and the story unravels quite smoothly on its own.

The Satanist context of the film played an ambiguous role to either point out or distract us; we can't be really sure that it has something to do with the dark religion, but then again, the marked trees, the murdered animals and the rather suspicious number of female victims sorta says it does. Either ways,  when the Satanist was caught, the plot began to unravel even more as twists comes and distorts what's happening so far.

Perhaps not the most well known giallo for anyone, Knife of Ice is an immediate fave for me. If I ever wanted to point out a wild card fave giallo, outside the usual pre-2000s Argento, of course, this would be it. Thrills and twists galore all the way, Knife of Ice is a tame yet engaging piece of Italian intrigue.

Bodycount:
1 bull stabbed to death with swords during bullfight
1 female knifed
1 cat found with its neck cut
1 female had her throat slashed with knife
1 girl strangled
total: 5
Posted by Kaijinu at 4:29 PM