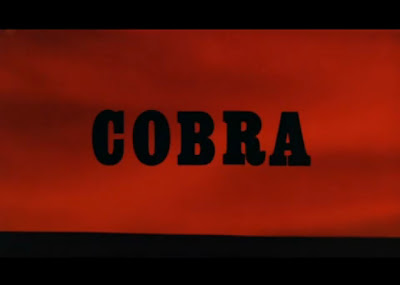 The action sub-genre has a funny way on influencing slasher films; it kinda began from the fact that slasher movies are the grandchild of the Italian gialli, where dead civilians took in the place of dead teenagers, hard-boiled cops over virginal final girls, and much of the plot development revolves around either the police procedural or the killer in their worst. By the time the 80s stepped in, some attempts to revive the gialli glory were taken and eventually some did succeed, but sometimes people would like something less cerebral but equally engaging and hard-hitting for their kicks thanks to the uprising of gun-totting action films like the Rambo series.

This is where Action-Slashers come in, with movies like Silent Rage, Maniac Cop, 10 to Midnight and, for some who counts it, the original Terminator taking their place in slasher film fame, mixing in high-kicks and lead pumping to the basics of stalk-and-kill theatrics. Among these is a movie called Cobra, a rather unique, if not effectively mixed slasher-action hybrid that features a "one man army" facing an actual army of maniacs.


Starting with the probability and totality of crimes occurring in the city being narrated to us, we watch a man riding his motorcycle under the bask of the sun interjected with scenes of what appears to be a cult hitting axes over their heads. The rider then proceeds to go inside a grocery center and starts shooting people at random, keeping whoever are left alive and trapped as his hostages.

Seeing the situation's out of their hands, the cops call in Cobra, the shoot-now-talk-later strong arm of the "Zombie Squad" whose mission is to deal with psychos with a whole lot of lead. After a brief shoot-out, Cobra manages to kill off the gunman, much to the official's headache as they see his process of handling these goons too drastic and grabs too much attention from the media.

However, it appears there's another killer prowling the city for unsuspecting victims; dubbed as the Night Slasher, he and his cronies systematically slaughter anyone that strays alone into their path and so far, none lived long enough to tell the tale. That is until a model who was just coming home from work had the worst of luck and caught him in action; though she escapes, she did ends up getting on top of Slasher's hit list as every moment possible, she finds herself under constant attack from the merciless killer.

Seeing her as an important breakthrough on the Night Slasher case, the authorities decided to have her under their supervision and protection, and who else can handle the job better than Cobra himself. But when the attacks became more frequent, it soon becomes clear that the Slasher has an army of murderers to deal with.

﻿Cobra (1986) is a hybrid of blombastic action cinema and messy slashers fodder, with the first half being pure stalk-and-slash as the Slasher and his legion hack up victims wondering alone in the streets. By the time the witness angle comes into play, the movie deals us with the complete massacre of innocent bystanders getting caught on our psychos' rampage, leading to not one but two massacres, one of them reminiscent of hospital slashers such as Visiting Hours (1982) and X-Ray (1982). After a while, it soon melts down to a shoot'em-up action flick with car chases, gun showdowns, and the inevitable mano-a-mano showdown with the killer, making the entire film look like two separate stories pieced together by small plot points that flows along quite nicely.

This could have been a more thrilling movie if both halves didn't ended up being either as an exercise of the genre's respective clichés, or have been lacking much of what made their genres good in the beginning. The slasher parts were fair with the stalk-and-kills but it's devoid of blood and most of the murders happened offcamera. In turn, the action portion of the movie does have the high-octane scenes and knock-outs that could excite the seasoned viewer but it's watered down with a cheesy script and relatively thin plot.﻿﻿

However, clichés and plot holes aside, Cobra is still an entertaining piece, putting in a rather different approach and/or perspective as a slasher movie and as an action thriller. It's mindless, generic and partially tame, but it's never boring; the characters are colorful and there's cheese to the story that definitely does the job to entertain in a so-bad-its-good value. Stallone's character, a sort-of Dirty Harry rip-off, come out as a thug-like anti-hero whose main interest is to dispatch the bad guys the moment they step in; not really productive or developing as a character but its fun as a dead-on parody of an action hero. Throw in a shoot-em-up game-esque climax where he grenades and blow up one thug at a time and you got a silly yet braindead good movie with a high camp value.

Stallone would later do another slasher title D-Tox (2002), though not as exciting as this film; fans of this man will give this film a chance, I can assure you, but for those who are willing to give this a shot, I’m not gonna stop you. I encourage you!