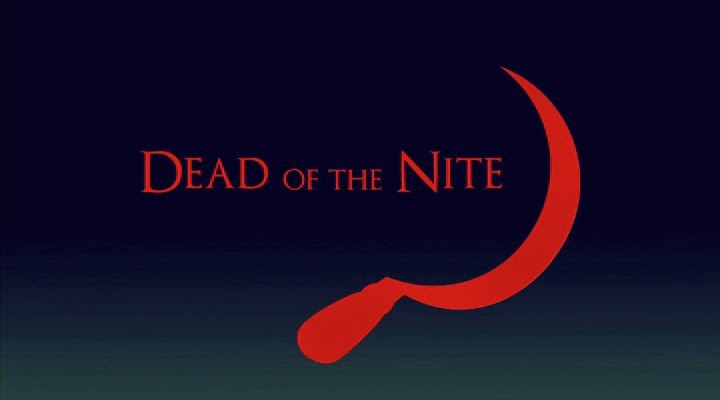 Found Footage and slasher films collaborate once again when investigating detectives uncover a video tape from a murder scene, in it recorded the last few hours of a five-team web-series crew hosting a live ghost hunt at the infamous (and fictional) Jericho Mansion.

According to the tale, there was once a disgruntled servant who murdered all of Lord and Lady Jericho's children before putting the sickle into himself, slicing off his face and putting a death curse on the land in which he'll return to slaughter anybody who dares enter the property. The land's caretaker (Tony Todd in a very small role) decided to humor the teens and allows them to do an overnight lockdown, investigating the manor themselves.


What they didn't know, however, is that they're not alone and something armed with a sickle has set its sight on picking them all off one by one.

One part supernatural, other part slasher, Dead of The Nite took a while before any of the gruesome stuff happens as the young investigators spend a good sample of their time doing some of the classic trappings in a supernatural horror flick, like setting up equipments and showing us the ropes, discussing the legend that they're supposed to be covering and even invoking the spirit by doing a ritual. (in this movie, the oh so popular Ouija board)

Seems to be going nowhere (save one scene that hints a shred of the paranormal) until a guy in a mask and hoodie shows up and starts hacking these teens up. It's kinda cool how this guy wants to show us the good stuff by holding the camera while he kills them but I have to admit it's still a bit hard to see a good murder if the camera shakes a lot. There are other shots present, but though due to the low-budget of the movie and probably to save some cash on effects, they're either  blocked in view by the killer or just occur offcamera and let the screams express the mayhem. The murders you do get to see, though, are kinda okay: despite shot in night-vision, they resemble the kind of slasher film hack'n stabs that you can find in any 80s released title, which is not bad.

Performances were rather good but feels a bit unimportant since the characters they play aren't all that interesting. Even the killer devolves from an intimidating silent stalker into a raving lunatic with a silly pompous mission, which is a shame; he's better off cool being mute and killing than gagging a victim and forcing them to listen to his cheesy I'm-the-guy-that'll-set-every-wrong-right monologues. Of course, there's a twist, or rather a surprise reveal, on who the killer is. It wasn't exciting and I find myself ho-humming the entire scene since I barely knew the guy outside his ramblings.

So is Dead of The Nite a bad movie? Honestly, it has potential. I like the idea of found footage slasher movies and this one had a nice set-up and a darn slick looking killer. Unfortunately, the execution of the attacks and murders were arguably tricky and though this movie tries to make these scenes look menacing, it just wasn't enough. It's missing the blood and the creativity that make fans glued to these scenes, so, in a lack of a better description, the film's dry and tame.

Still, it's pretty ambitious so I could give the movie at least that. Dead of The Nite may not work all the way but concept-wise, it may worth a single night's rent.