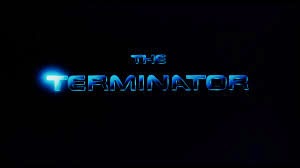 Yeah, I know. The Terminator is not, I repeat, is not a slasher movie. It's hardly a horror movie to be honest, so calling this a slasher is a real stretch. So why then am I reviewing this film in a blog site dedicated in covering slasher movies and bodycount friendly thrillers, you ask? One word: influenced.

The 21st century turns out to be a post-apocalyptic wasteland where humans are nearly overruled by sentient machines. That is until one hero emerges, John Connor, and began a revolution against their mechanical overlords and waged a battle that appears to be going in favor of the humans. Hoping to stop this, the machines send back in time the Terminator, a highly advanced cyborg that is flesh on the outside, cold steel in the inside. Its mission is to assassinate the mother of  John Connor, a simple waitress in 1984 named Sarah.

Fortunately, the humans use the same technology and send back their own soldier, Kyle Reese, to protect Sarah who by now is becoming well aware that someone - or something - is out to kill her. As the Terminator gets closer and closer in killing its primary target, it's up to Kyle and Sarah to survive its attacks and find a way to win a battle against an unstoppable machine.

Looking into the plot, The Terminator is really bare bone and follows classic chase movie tropes like Duel or Australia's Road Games (1981). To say the least, the entirety of the movie resembles the stalk-and-chase climaxes commonly found in most slasher movies released that year, only the killer here wields guns instead of hatchets. From POV shots and some scenes of it committing methodical killings, the villain itself is a scifi parody of indestructible maniacs in slashers, its mask is an entire fleshy coating and its sole purpose is to kill, taking hits upon hits as its targets fight back, only for the Terminator to get back up and attack anybody that gets in its way. A young Arnold Schwarzenegger plays this mean machine and, even if he had very little lines, his bulked build and unfeeling gaze made him a very intimidating presence to go against with.

Thankfully, director James Cameron knew how to handle such a unique monster and decided to show off his skills in doing good build-ups, explosive action scenes, and a direction loaded with pretty decent special effects. Before you know it, what we have is a very workable hybrid of an action/scifi movie with a few hints of the horrific, such as merciless home invasions and immortal villains. It even went for the melodramatics on us as we see Sarah's troubles on accepting the fact that she is going to mother a hero who will fight back a war that is definitely going to happen; we can relate to this in the sense of accepting a responsibility that we hardly saw coming and how much of our normal lives will be sacrificed to make it work. This is why Sarah Connor, played by Linda Hamilton, is such a powerful take on a Final Girl; while her transition may seem rushed, the ordeal is enough to let her know that she may not have much to say against it, but she will and must learn to fight back.

And fight back she and her savior did; as a survival film, The Terminator has some of the most thrilling set-pieces I've seen as adrenaline rushed car chases and lead-heavy shootouts peppered the screen whenever the big guy shows up. I love the synthesizer score used for these scenes in a way that it gives it a timeless feel as well as a nostalgic value.

So great characters, memorable villains, and stylish direction aside, perhaps another aspect of the film that was impressive was its special effects; for its time, the visuals concerning our robotic villain are just effective, mixing fluid stop-motion, animatronics and well designed make-up work. Every time our Terminator gets badly damaged, we see more of its inner metallic structure until the stalk-and-kill friendly climax where it finally revealed its pure robotic form, giving us a nightmarish visage with glowing red eyes and a persistence that cannot be reasoned with. 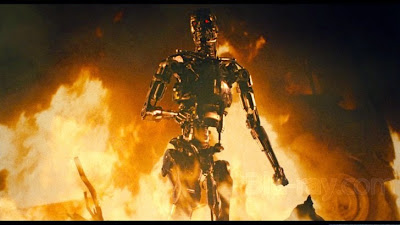 And to think all of this began after James Cameron dreamed of a robotic torso dragging itself to kill him with a knife; it's a scary image and this film captures not only the same sense of dread but also added a level of thrill and excitement that remains unbeaten by most action, scifi, and/or thriller films through out the years. Argue as you may whether The Terminator is a horror film or not, one can't go wrong with this classic.

This and its sequel, Judgement Day. But that is a story for another time...

Bodycount:
1 male punched through the chest
1 male shot with a shotgun
1 female repeatedly shot on the head
1 female blasted to bits with a laser (flashback)
1 male killed in car crash (flashback)
2 female mentioned to have been shot dead
1 male beaten to death
1 female shot dead
1 male shot with an automated rifle
1 female shot with an automated rifle
1 male crushed against the wall with a car
17+ officers shot down during shootout
A number of civilians gunned down (flashback/dream)
1 female implied murdered
1 male beaten to death
1 male killed in pipe bomb explosion
Total: 32+
Posted by Kaijinu at 5:42 PM