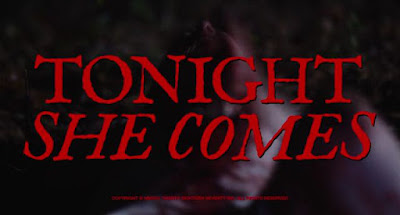 As a life lesson, my mother taught me not to set my expectations too high on the good chance that what I am building around up here in my head will be completely different to what I'll be getting in real life, saving myself from any disappointment. Now this is a pretty basic and universal fact to keep in mind and I mostly take this approach to a lot of things like new meals, meeting people, jobs, books to read and, of course, films. But since I am human, I'm still prone to forgetting this and often a times I expected fun gory good viewings from movies like Tonight She Comes, especially if it comes with a rocking poster art and a decent-enough trailer.

Oh, how wrong I was...for most parts.

Tonight starts with a little reminder that the movie should be played loud "as hell" (a spot-on recommendation as the film's 75.5 % insane dialogue) before showing us a pregnant Kristy running from something- or someone- in the woods at midnight. She tried phoning for help to no avail and it seems she doesn't want whatever is growing inside her as she starts stabbing her womb (which is carved with Satanic symbols, mind you) with a glass shard.

After that spectacle, in comes the following day and we now follow Kristy's two gal pals, Ashley and Lyndsey, on their way to the same woods for a camping weekend, and they are soon joined by, through a series of mistakes and dumb luck, a local teenage mail boy and his peeping tom friend. The two parties basically bonded over booze, drugs and pranks, and all seems to be going well until one of them stumbles upon Kristy's non-pregnant, woundless and naked body. After that, all hell breaks loose, and then some.

On a nutshell, Tonight She Comes is set up like your typical backwoods-type, with dumb teenagers driving to the woods to do some fun, only to encounter something deadly out to kill them all. What this film did with this backdrop, however, is anything but typical as it throws in a good dash of demonic/witchcraft horror, along with off-kilter black comedy and gross-out splatter gags, an attempt that only half-worked with more misses than hits.

You see, there is being sincerely funny through wit and there's being obnoxiously annoying by trying too hard. Tonight dangerously leans close to the latter as it milks and dries up whatever exaggerated cliches it can grab hold to, mainly coming from the fact that its characters are mostly drunken perverted idiots and that there's supposed to be a lot of blood at work (because, y'know, horror!) in the hopes that it'll be funny. Personally, you can only force so much dumbassery upon your characters before it borderlines into irritating, juvenile and boring, plus dedicating an entire sequence to a single gross-out gag just felt lengthy, one-dimensional and overcooked to the point it lost whatever comic factor the filmmakers were aiming for. This left Tonight very tedious and cheap to watch, a bloody mess of scripting, acting and editing, which is a big damn shame since the mythos they built around the killer was so full of potential, it's almost the only good thing you can get from watching this wreckage.

I like the fact that the killer is a ritual gone wrong and that she is a tad pleasing in the eyes being completely naked par a cake of blood all over her. She gives off an aura of both alluring mysticism and savage slasher horror, capable of withstanding mortal attacks and lashing out a few impressive murders, but she's never really used all that much and she's mostly just there walking around like a dazed zombie. The murder count of Tonight, in turn, doesn't really deliver much despite some few decent executions (a sleeping bag bashing and some eyes thumbed. Ouch), all blame falling on how far apart they are, how senselessly boring the scenes between each are, and how they are mostly wasted on such poorly constructed meatbags that this movie deems as "characters".

Perhaps if it took better time to write a more solid narrative and, I dunno, worked on some actually funny splatter gags, I bet Tonight She Comes would have been the next Evil Dead II (and I got a feeling this is what the producers were aiming for) but, no. It stuck around with grade school level dialogue, desperately and repeatedly shoving one joke on us that quickly lost its touch, and pretty much just gave up on the climax as everything simply falls apart to a bloody but pointless pile of mush. If you are eyeing to see this film expecting a fun horror movie, you're only going to get that for the first ten to fifteen minutes so, no. Don't bother. Go watch all Evil Dead movies and TV series instead. Same horror comedy promises, better execution.

Bodycount:
1 female repeatedly bashed to a tree
1 body seen under some sheets
1 male shot with a shotgun
1 male bled to death from a cut wrist
1 female had her face burnt by ritualized blood, bitten on the neck
1 male found with his face pulped with a telescope, groin mangled
1 male murdered with a glass shard
1 driver presumably murdered, blood splatter seen
1 female had her eyes thumbed
Total: 9

(P.S. For the marketing shmuck who dared call this shit It Follows meet Cabin Fever? I think I have a working jackhammer here with your name on it. Why don't you come down here and bend over, you lying horse shi-)
Posted by Kaijinu at 3:59 PM