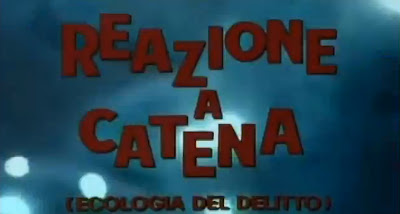 A Bay of Blood (Reazione a catena) (AKA "Twitch of The Death Nerve") (Italy, 1971)
Rating:*****
Starring: Claudine Auger, Luigi Pistilli and Claudio Camaso 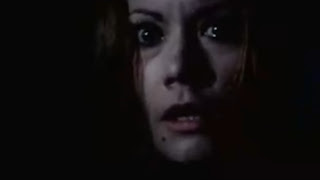 On one rainy day, a wheelchair-bound elderly heiress is brutally hanged by her husband in hopes of receiving her whole fortune. No soon after he set up what appears to be a forged suicide note, another assailant springs out of the shadows and murders the man in cold blood. The murdered body of the husband is then dumped, and the elderly woman was left untouched. Plot thickens.

On the following day, we're introduced to real estate agent Frank Ventura and his lover Laura, both have plotted the murder of the heiress and struck a deal with her husband to take possession of the bay. Not knowing that the man they bargained with was murdered, things further complicates when four teenagers breaks into the bay and, after enjoying themselves, gets murdered by the same assailant from before: the countess' illegitimate son, Simon, who now struck a deal with Ventura to sell the land and finished off any known witnesses to his previous crime. But when Simon's half-sister arrives with her husband to claim the land, what will soon drive the story is a literal bloodbath as characters clash for the property and no one is safe or innocent... 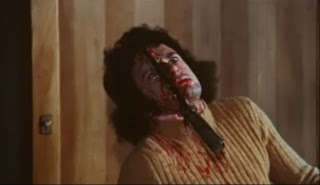 A Bay of Blood (1971) is anything but simple; the continuous twists and arrival of one character to another weave a complicated turn for each scenario and murder, but the whole concept is basically a fight for the land which every cast is willing to kill for it due to its momentous amount of value. It's kinda funny, if you look at it in a way, that none of these fellers thought of just talking it over instead of going straight for the knife... or the billhook...or the spear... more to the fact that many of the murders here were later re-used to so many slasher flicks, some more obvious than the last (Fans will recognize the spear-kabob kill and the billhook facial splitting as the same murders to be committed by Jason in his debut feature, Friday the 13th Part 2. 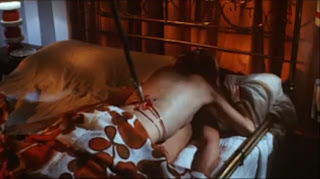 Regarded by many as Mario Bava's feature to start the slasher film industry running, A Bay of Blood (1971) is one step away from his usual giallo build and one foot towards the stalk and slash fare; it is devoid of mystery, but in its place are multiple suspects and an interweaving plot full of twists leading to blood running like water, all for the purpose of thrills rather than solid story or character development. This fact help many to consider Bay as one of the first few films to act as the basis for slasher films, especially if one would point out that teenage victims here were just randomly tossed in to heighten the count, which further staples this gore movie with its surprises and over-the-top violence that even by today's standards is deliciously brutal, a full-on proto-slasher. 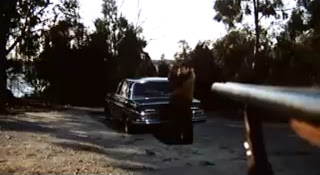 Production-wise, Mario Bava delivers a gothic tone to the film, a familiar trait found on most of his works. The old mansion provides enough creaks and dark shadows to hide unforeseen dangers, and too the macabre take on showcasing the corpses with shots of unblinking eyes squirmed with water life. The film boasts a luxurious looking lake and backwoods, which again staples a familiar territory of lone victims being killed off in an uncharted and near abandoned location. The pacing of the story makes a nice flow for a convulsed plotting, taking its time to point out who's behind who and how he or she have been thrown into the fray. Some great gore effects and a fairly tense soundtrack have also authenticated this film's unsettling atmosphere and somewhat morbid humor, slapping us with shocks and unsuspected turns that either tenses the situation or make us laugh at its obscurity. And I meant the latter on this film's somewhat bizarre ending.

A Bay of Blood (1971) is rightful to be called brilliant; a melancholic film that aged well enough for the enjoyment of many horror junkies out there with a decent taste on the aloof yet dark in nature. Not to mention, many of its slasher kin s owe this film as much thanks to starting the genre as they did to Halloween (1978) or Friday the 13th (1980).

Bodycount:
1 wheelchair-bound elderly female hanged from noose
1 male knifed to death
1 female nearly beheaded with billhook
1 male had his face split with billhook
1 male and 1 female skewered together with a spear while in tryst
1 male strangled with telephone wire
1 female decapitated with hatchet
1 female strangled to death
1 male impaled with spear
1 male knifed
1 male and 1 female shot with shotgun
Total: 13
Posted by Kaijinu at 12:55 PM