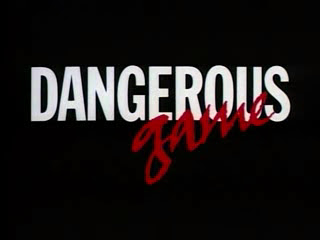 (Hud, here's yer first shout-out! Thanks dude, for this!)

When a computer expert and his buddies decided to rob a department store one night just for the kick of it, they weren't expecting a disturbed policeman, who was recently taken out of the force thanks to their shenanigans, would be stalking them once they get in. With a damaged security system locking them inside, the kids will soon have no choice but to fight back or die trying.

While it resembles the familiar Shopping Mall slashers (Chopping Mall (1986), The Initiation (1984) and Hide and Go Shriek (1988)), Dangerous Games is actually low on the bodycount but makes up for its lack of murders with hard-hitting action and intense chase scenes. Often labeled as the Ozzie version of Die Hard, it has its fare number of gun fights, vehicular action and high flinging scenes (such as a ledge walk all too familiar to The Ledge segment of Cat's Eye (1985)), as well as some slasher film tropes with a new take. For one, the film's villain, Officer Murphy, didn't start out completely homicidal. He was disturbed, but not enough to actually want the teens dead and his presence in the mall is more on scaring them in revenge. It wasn't until he accidentally threw a throwing knife to a kid's heart that he goes ape shit crazy - schizophrenic spinning, hot flashes and all.

The moment he dons the army suit and a mean set of crossbows was also the moment he starts hunting them down. Sadly, as badass as he become, he never really get to kill another. Instead, he plans to rid of them and the evidences of his man slaughter altogether through your typical action movie cliche of blowing things up. Not very slasher-like, but the stalk and chase scenes before this plan gets revealed were, so the film still has its worth among bodycount fans.

Dangerous Games is simply a nice thriller despite the low-brow direction, nostalgic 80s feel and too the low kill count. Guess some things are better off simple and straight forward, and I definitely recommend this as a rental!

Bodycount:
1 cat killed offscreen
1 male gets a thrown knife to the chest
Total: 2
Posted by Kaijinu at 10:29 PM