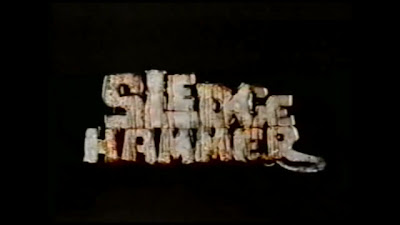 It's hard to keep track on movies like this considering my condition in this country, my dear oh-so-beloved country which refuses to import foreign films outside Lionsgate, Universal, Disney and the rest of the big name companies. Much more is it harder to look for a title like this: not only is this a Shot-on-Video horror flick from the 80s, but it's also as rare as a dick on a cactus.

Moving back, thanks to an anonymous tipper, I managed to at least stream this online and thank God it wasn't much of a waste of time. Sledgehammer starts with the standard opening; child gets abused and locked in a closet by his sex-eager mum so he wouldn't bother her and her lover's dick sucking night of fun. They got about a minute or two of love makin' before the boy escapes captivity and brains them dead with, no-brainer (pun intended), a sledgehammer.

Ten years later, a group of seven teenagers with perms bigger than the next, crashes in the same house where the opening murders were committed for a night of partying, sex and an obvious foodfight filler. They hold seance (pronounced as "Seens" by one dumbfart...haw haw!) and some pranks AKA false kill for funsies, all before one hulking maniac in a plastic mask and checkered blue shirt comes in, wielding a mean sledgehammer. One by one, he thins down the momentary occupants of his home, as swift and as heavily edited into slow-mo as possible.

All the while, the cheese triumphs once again with a love story between the two main characters, whose engagement is starting to dwindle as the husband-to-be is having doubts on the idea of tying the knot and giving up the parteh forevah. Cue the cheesiest make-up scene ever (beer can balancing on the head...yes...they made up after the dude balances a beer can...on his head...) and an uber slow-mo (again) walk scene with added music to match. It's all good until they come to face facts that a phantom construction worker wannabe is smashing their friends to a bloody pulp, which the only thing that makes sense here is that the killer appears to be immortal and can revert back to his ten year old self for some odd reason.

Sledgehammer is everything a low-rent, low-budget shlock is, only doing a better job on entertaining us compared to the rest. Excessive gore, ultra-cheese, synthesizer music, echoing audio, rusted script, stale looking premise, uneven lighting, obvious edits, pacing problems, it's sin after sin after sin of low-brow home-made horror flicks cliches. But thankfully, it's not an entirely garbage even if it does contain more than one slow-mo scene - in fact I guess half of the onscreen murders were committed in slow-mo for some reason - I'm putting my money its done for filler since there's really nothing else going on here and I'm guessing they needed to pad it more to make it a full feature.

While it tries no effort hiding the minimal budget, it does make up for it with some creative use of its low-budget, even if it does end up being unintentionally (?) funny. Taking tropes from forerunners like Halloween and Friday the 13th, Sledgehammer do away every slasher film convention and did it with enough ham to be an entertaining bodycounter piece. What more is its fairly cool looking slasher, whose simplistic get-up got it working and hulkish strength matching his weapon of choice. It wasn't much of a mystery that he's supernatural, able to teleport from place to place, withstand fatal blows and even shifts back into his ten year old form, he's pretty intimidating as he can easily corner you.

The climax has the two lovers facing off the masked killer, which is as predictable as it gets to a seasoned watcher, albeit still watchable as it dwindle down into a mano-a-monster showdown between a topless hero and a pulped up killer.

Sledgehammer, rarity and all, is definitely worth finding for all slasher purist. Beneath it's bad lighting, bad audio, mediocre story and cheesy acting is a small budgeted slasher film at its finest. I dare you to watch it and not to laugh at that scene where our lead male got slapped by a kid...I dare ya!