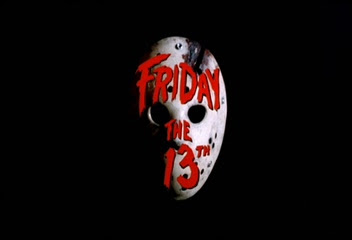 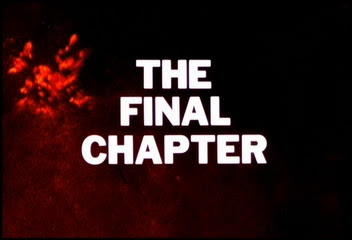 Upon posting this, it was the first Friday the 13th of 2012 and two days from then, it was mah Birthday.
That's two whole days before I reached that part of my life where I will have an existential crisis, a flourished nerd life, and a bloated gut from eating too many barbecued ribs at RACKS. (And I do not regret anything from the latter!) But before that, as tradition in every Friday the 13th that falls, I shall do a Friday the 13th film review and it was by the grace of the universe that I have to cover one of the series' most defining entry. Be warned, though, for there be spoilers ahead!

Last time we saw Jason, he got his signature mask and an axe splitting his skull open. Now down to the ground and believed to be dead, Jason's body got transported to a morgue nearby where a hapless shmuck of a coroner and his vixen love-boob got off a quarrel, leaving said coroner alone with...um...some gymnastics tape (?) to pleasure himself with. As usual, sex brought the dead Jason back to life and he's quick on doing what he does best again, with a guy's neck sawed open and a gal getting a gutted with a scalpel, before disappearing into the woods again.

Which brings us to subject two; a group of partying kids (Hey look! Crispin Glover!) rented a house all the way from Crystal Lake, oblivious of the lake's bloody legacy (again). They also happen to be partying next to the Javis, a single parent family consisting of a young Corey Feldman as Tommy, a horror make-up obsessed aficionado (Tom Savini's love note to the franchise?), his older sister, Trish (Kimberly Beck) and their mum. So these hapless thespians are now doomed for another night with the J-man, as he's easily slicing his way back to both houses, finishing all the teens before moving to the Jarvis family. But who is this mysterious "bear-hunter" who carries a large machete around? And what of Tommy's skills with the make-up? Could the combined forces of these two spell the end of Jason?!

...Nah, of course not, but for the time being, it sure sounded like it.

All the while, Final Chapter did put a lot of effort for its part. Moving away from the standard cheese the last sequel had succumbed to, Director Joseph Zito appears to had been juggling whether to end the franchise once and for all, or widen the legacy despite some cold shoulders among the casts and crew. (especially Feldman, whose motivation on "hacking Jason" was that he imagined he's hacking Zito. Okay, creepy kid...) Evident in it's intention to end the franchise while it's still fresh was it's no-bars-hold nudity and murder spree (which is, again. bigger than the last), but it was also clear as day that they were doing some sort of torch passing from Jason to a mentally traumatized boy.

The boy on topic is one of Jason's most known match, Tommy Jarvis, the franchise's first kiddie to get involved in Camp Blood. He would eventually try to mesmerize Jason by shaving his head bald and looking like him, in an attempt to ruse him, bring back his innocence or something like that. Nearly worked, until Trish sucker-slashed his mask off and revealing a even more disfigured face behind the mask. Tommy then finishes him off, in a side-splitting action of a machete, and later, hacking him to death. What would follow soon after is an ambiguity of results, as we left wondering if Tommy was really alright in the end or become a disturbed survivor who will one day snap from this experience.

It was a good deal, if it wasn't for the all-too-inevitable popularity of the man behind the mask, that and the lousy follow-ups in attempts to do said story, but that's a rant for the next Friday movie review.

What we did have here is, yet again, another entre' to the slaughter. What did sets this a tad different compared to the other backwoods slashers, other than the lot of continuity problems and goofs, is that Final Chapter remains popcorn-munchable with its near thinning plot. In fact, if it wasn't for the franchising, the film would have been one great stand-alone film to watch on a Friday or Saturday night with Jason being any other killer out there. At the end of the movie, we're left Jason-less and with a possible prodigy, would the next sequel surely be...better? We'll just see.
bodycount:
1 Male had throat cut open with hacksaw, twisted
1 Female gutted with scalpel
1 Female knifed through the neck (while eating a banana!)
1 Female macheted through gut
1 Male had his groin impaled with harpoon
1 Female impaled with spear
1 Female killed (drowned in original draft)
1 Male hacked on the face with cleaver
1 Female pulled through window and thrown to her death
1 Male stabbed in the back of the head with a knife
1 Male had his face crushed
1 Female axed in the chest
1 Male hacked to death with garden claw
1 Male had his head split on the side with machete, hacked to death
total: 14
Posted by Kaijinu at 2:34 PM