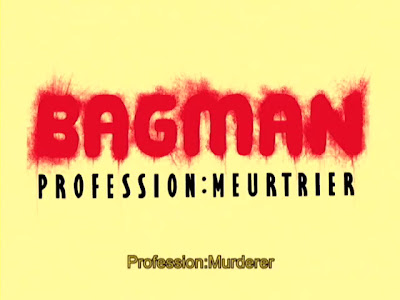 A running time of 19 minutes? For this Canadian Splat-stick shtick, that's all the time it needs to bring us some juicy and hilarious killings. 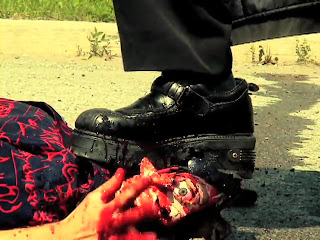 Starting with the aftermath of a cabin house slaughter, a surviving girl watches as her friend get sliced in quarters by the titular paper bag headed killer, who appears whenever somebody says his name three times. (Think Beetlejuice with a side of Candyman)

We then skip to her being interrogated by a detective as, it turns out, another slaughter took place after the opening kill; after barely escaping her killer, the girl gets hit by a van harboring wannabe pimps and punks. They made a mistake on calling the killer three times as a joke, a mistake that they will pay in blood (slapstick style~!) and no one, not even the recruited number of gangsters, can do anything to stop it! 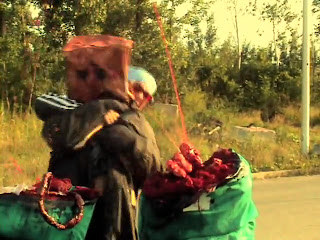 While the plot is simple and far from plausible, Bagman is perhaps one of the craziest and funniest shot run through low-budget mayhem and cartoonish violence! With twenty minutes of pure slaughter and blood, it pulls out the most outrageous murders ever to be seen on screen, from the basic guttings, stabbings and shootings, to obscurely extreme murders like a guy getting shoved into an eviscerated gut, bodies kicked in half, and cinemas' best umbrella kill, all committed by The Bagman, a silly looking villain whose endless arrays of weaponry earned him a personal badass reputation!
The effects and acting are far from great from the bunch of Troma worthy rubber bodies and obvious fake blood, as well as some overacted and intentionally annoying roles. Still, Le Bagman managed to make it all work as a brainless, comical slasher short, made entirely to gross out and upset lunches, as well as, most of all, to entertain. Bad taste at its best, it's a slasher flick that's low on standards but high on flavor!

bodycount:
1 body found in half
1 male had his head split in half with machete
1 male disemboweled with machete
1 male had his chest and back hacked with hatchets
1 male had his head stomped against rock
1 male thrown to a street post, back broken
1 male bashed on the head with baseball bat
2 males gets a double gut stabbing
1 male knifed on the chest
1 male gets his head split by the nose with shovel
2 males gets a double gut slicing with a knife, torsos kicked off
1 male beheaded with bling-bling necklace
1 male trips and gets a knife in his eye
1 male had a steel pipe to the gut
1 male disemboweled, later gets a guy's head shoved into wound
2 males impaled by the gut on steel pipe, blown up with bomb
1 male shot
1 male shot
1 male shot on the face
1 male gets a severed arm shoved through his mouth, exits to the back of his head
1 male had a gun shoved into his head, shot from the inside
1 male gets a sledgehammer to the head
1 female had a bamboo dart shooter kicked into her mouth
1 male stabbed on the gut with a bladed pimp cane, umbrella shoved into his arse and split him open
1 male and 1 female eviscerated with chainsaw
Total: 29
Posted by Kaijinu at 9:58 PM