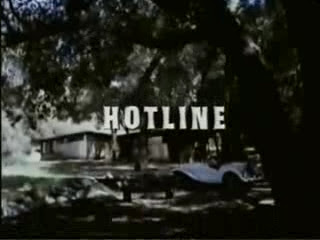 In this made-for TV thriller, Carter plays Brianne "Bri" O'Neal, a bartender working at a Malibu restaurant called Kyle's. She's the kind of vixen that can take care of herself and handle anyone, including drunken all-nighters, using nothing but her wit and sharp tongue. This rather makes her an obvious final girl and perhaps a strong one, a fact that Justin Price, the chief psychiatrist at a local crisis center known as Westside Hotline, seems to agree with as he offers Bri a job helping people over the phone. While things were fine at first, Bri suddenly receives phone calls from a man claiming to be a murderer, cluing her in about his previous murders. This caught the attention of Bri and she makes it her mission to solve the mystery, find the killer and bring him to justice before he commits another murder.


While marketed as a slasher film, Hotline (1982) was more of a murder mystery than your standards bodycounter, complete with a gimmick concerning the killer using childish rhymes that are connected with certain aspects of their murders. (years, how the kill was committed, place, etc.) If it's anything, the movie is a thriller for the thinking kind made simpler for the common folk who just wants to enjoy a nice variation from the usual daytime talk show.

Of course, the influences of the usual slasher tropes are still present; obscure callers aren't entirely new to the genre with films like When a Stranger Calls (1979) and Black Christmas (1974) terrorizing their victims with more than the usual prank calling, soon leading to a finale done with an old-fashioned stalk-and-chase scene concerning a madman wearing eye-liners underneath his eyes, inside an abandoned bar. Sadly, the little TV flick stands out as no more than a half-and half thriller with very disappointing traits to follow it's strength. I for one was a little disappointed with it's sluggish pace, very minimal bodycount (only two), and too many lengthy discussions that I find a bit tedious to work through. Perhaps I expected too much, but for a film labeled as a slasher, this can be misleading.

Still, Hotline is fair for what it is and I am sure those who get their kicks with shows like Murder She Wrote would definitely find something worthwhile from this title. It may not be that clever or complex, or that scary or creepy, but it's a decent change from the usual screaming bikini girls being chased by masked maniacs.

Bodycount:
1 female found murdered, body thrown off a cliff
1 male shot through the chest with harpoon
Total: 2
Posted by Kaijinu at 6:45 PM