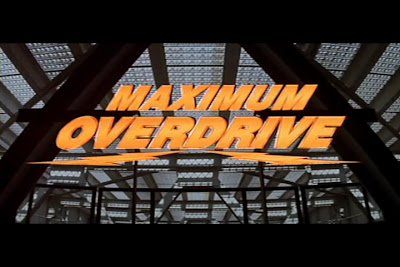 
From the brilliant mind of Stephen King comes the greatest moron movie to this side of Carolina, U.S.A.! 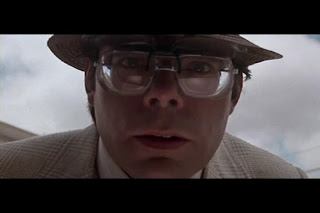 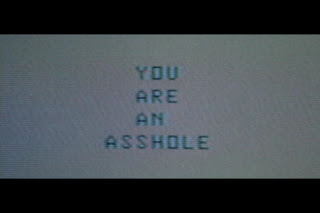 When Stephen King snorted coke and decided to direct his first feature film, it must have been one heck of a ride for everyone to follow the direction of one of the best authors alive gone a tad flimsy. From miscalculated timing on explosives and blood packs, to the credibility of a film to follow a simple story, King vowed never again to direct after this little incident despite of recent talks of him taking interest in directing again popping up lately. (Kids, hide the coke!) So until then, we, the fans of an estranged feller of a writer, are left with a timeless masterpiece of wreckage and dumb-foolery that's good enough to entertain us. Or make us question what exactly are we doing with our lives. 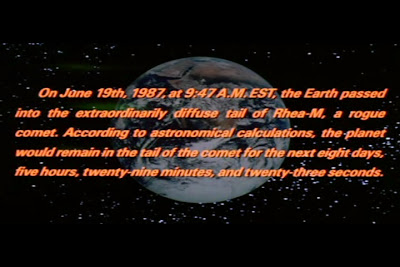 After said comet tail passes through Earth, its radiation enters the atmosphere and causes a bizarre reaction to most all of Earth's machines, giving them LIFE and a hellbent thirst to kill people for no apparent reason. From soda machines that shoot cans with skull-cracking strength to trucks that glow red beam lights in rage, caught in this predicament is a handful of survivors fighting for their lives inside a truck stop, living long enough to get through the revolt of the machines in one piece.

Smoothing its way through a generation of rock and roll music and cheesy horror, Maximum Overdrive could have been a long epic music video featuring rock songs of AC/DC and, so to speak, the comparison isn't far from it! It's loud, crazy, and above all, overdriven with nonsensical humor and violence.

The cheese in this film is phenomenal, knee-deep lacking of credible multi-dimensional characters and talents to fill their shoes but the way the film is executed is so crazy that there's a level of charm to it. We get living killer machines, slashing and crushing their way into rebellion in a catchy tune that sounds like a robo-version of Psycho's shower theme, a truck stop with hidden arsenal and bunkers, random scenes of devastation, trucks that explode before they hit the dirt, and the grand muy machoism in the latter parts to blantant given the film nicknames one of our protagonists "Hero". It's extremely stupid at all point, including its own the idea of a radiation causing machines to rise with life (Why do we still have cars being driven by humans, radios that announces news, and a missile launched at outer space to destroy a space menace that literally came out of nowhere?), however, for those who're willing to see this film as a comical, disaster film, intentional or not, all this messed-up movie making and plotting could might as well be a the best reason to love this film and more.

Told true, the film sports a lot of nasty murders on the first half that pays tribute to slasher nasties with people getting killed by blow-dryers, toy cars, lawnmowers, ear buds attached to walkmans, ferry bridges, steamrollers (that one's my personal fave) and trucks. But by the time the second half comes, it suddenly became this action hybrid where we get a shoot-out spree between humans and machines, destroying/killing a fair number from both sides. Looking into this, when it comes to plotting or making credibility the word for this film, it's a dragged work but an entertaining piece of drag for that one at least!

The Stephen King short story this movie is based on, Trucks, is more simple than this pseudo-epic cinematic piece and even got another adaptation in the form of a TV movie sorta-remake Trucks (1997), which follows the short's story much more accurately with some added scenes of truck murders which made it much closer to a standard slasher. But comparing the two, Maximum Overdrive at least brought us a brighter munch for your popcorn as late Saturday night viewing B-flick. The goofs and mismatches provide more unintentional delight than nuisance (at least for my taste) which is all I could ask for in a deranged and impaired movie like this.

King, if you ever wanted to do something right and do it yourself, please, don't do drugs. I love you man, but them drugs do funny shit to yer brain. Glad you gave up the stuff. But then again, if the result's is something this crazy fun so who knows?

As for me? I'm feeling divided whether I should recommend this title or not. Surely it's not for everyone's taste, but I assure you, if you're a horror fan at general, you got to at least see this cult classic once.