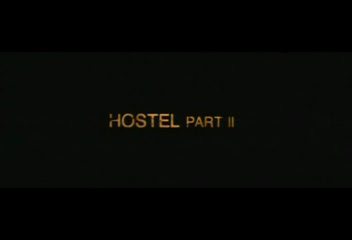 Hostel II starts a few months after the events of the first movie, Paxton, the (un)lucky survivor of the previous slaughter, is alive and well, but suffers from a constant attack of survivor's guilt and night terrors, much to the complaints of his girlfriend. But as much as she is getting impatient with her boyfriend's plight, she later gets a big surprise the following morning when, upon waking up, she finds our "Final Boy" headless.

We then forward ourselves some time later to a new set of teens vacationing in Bratislava; friends Beth (Lauren German), Lorna (Heather Matarazzo) and Whitney (Bijou Phillips) find themselves accompanied by the mysterious Axelle (Vera Jordanova) who, unknown to these girls, is hired to bring fresh victims to the secretive and dangerous Elite Hunting Club. One by one, they're captured and set up by the club as prices for winning bidders who wish to slowly slaughter some innocents.

Now, as far as torture porn is concerned, Hostel 2 featured equally nasty set pieces that deliver shrills and spills from every dismembered body parts imaginable, with the nastiest piece being an Elizabeth Bathory-inspired blood bath (literally) where a nude victim, held upside down above an ancient bath, was sliced to ribbons by a scythe-wielding bather. However, looking pass these displays of grue, I do like the fact that there were fewer torture scenes compared to the first, as most of the gore here were done off-camera and gave more emphasis, in exchange, to the world of the Elite Hunting Club itself.

For the first time, we get to see what runs the club and how it had silently taken the world by storm. It's a movie about money and it power over morals, which made Hostel 2 an interestingly thoughtful follow-up as a pseudo-sequel.

The leads are also more likable than the first's; Lauren German and Vera Jordanova both play fine female casts that brought an exotic and more engaging characters that are both fleshed and easy to root in a neatly story driven horror flick. The two 'winners", played by Roger Bart and Richard Burgi, also gave the story contrasting views on what might be going through the club members' sick heads; as winners of a systematized torture show, Todd (Richard Burgi) represents a member whose excitement for his first killings got him blind-sighted on what he's really doing, turning tail and chickening out the moment he realizes he was killing a girl. (An act that cost him his own life) Roger Bart's charcter Stuart, on the other hand, is more unhinged; for the majority of the film, his mouth says No, but once he tasted blood, his hands later say "yes".

The sets are nicer, more advanced compared to the wet and dirty first, as we spend less time on the streets of Bratislava and more in the indoors of Saunas, festivals in small islands and the hostel itself. The torture chambers also improved since, with a wider array of weapons set up for the partakers and bigger rooms with more advanced security system. This sequel knows how to do it bigger and, by so, brought a whole new light to its own mythology.

Hostel 2 is underrated, I'll hand you that; a shame fate for a smart and imaginative sequel for a relatively stale and overrated original. I maybe one of the stepped-on few who will say this but, yes: the head-football ending was a nice touch and Hostel 2 is awesome!