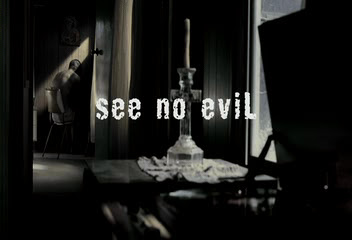 While I'm not an overall fan of WWE, I do find it amusing to see these "actors" do their theatricals outside the ring and into the screen. A handful of them have gone to notable success (Dwayne The Rock Johnson and Hulk Hogan did pretty well for themselves), while the rest took their talent to smaller scales of entertainment, such as this killer flick of moderate proportions.

Starring Glenn Thomas Jacobs (AKA "Kane") as serial killer Jacob Goodnight, who years ago had his hideout busted by a couple of cops. Finding the place a littered mess with religious imagery tainted with blood and grit, the two also discovers a blinded girl, eyes torn out from her sockets, before one of them gets hacked to death with an axe by Jacob himself. Shooting the maniac in the head, Frank, the surviving cop, makes it alive with only a missing hand and Jacob was never heard of again...

Moving a four years ahead, Frank is now escorting a group of delinquents, including two potential final girls Kira (Samantha Noble) and Christine (Christina Vidal), to clean and fix a run-down hotel for community service in exchange of reducing their sentences. What they didn't know is that the hotel happens to be the same hiding spot of a more-than-alive Goodnight. Rigging the place with one-way mirrors and trip wires, he systematically hooks, kill and gouge out eyeballs for his collection, while the frightened (well, some are) teens fight for their lives.

See No evil is really no more than simplicity. It's not anything big, but if it's gonna be anywhere, it'll be its tirades of cliches. Ranging from a predictable paint-by-number storytelling to one-dimensional casts and the usual "twist", WWE Film's first release is all but new. Even Kane's Goodnight character is a little cliched; obviously influenced by Jason, his mama-treatment just got a tad more traumatic as his past is haunted by humiliation and torture from a zealous mother, shaping him into "God's hand of judgement", whatever that means. What was wasted on production and marketing, makes it up with some worthwhile gory murders, torment, a really intimidating villain/s (despite their shortcomings), a grittingly effective location and pure popcorn cinema traits. It's entertaining still, in a very basic and thought-absent way, so far the only thing that actually got it running in the first place. It has a few dull point but its quick pace left no dragging moments, and the acting and camera work are neat all the way.

I can't really say anything more about this film, its basically just your average slasher film. Gory and messy, but still very mediocre. Worthwhile a rent whenever it hits you.