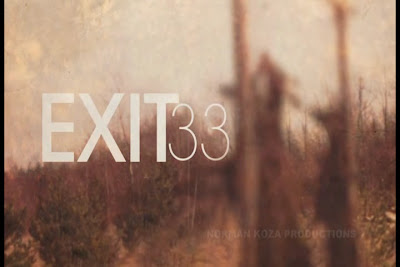 Lately, I've been thinking when would Kane Hodder have a better role other than being the best guy behind Jason Voorhees and Victor Crowley. I've seen him doing cameos in films like Behind The Mask: The Rise of Leslie Vernon and 2001 Maniacs, as well as starring in low-budget flicks like that brain cancer inducing Born (2007). He had been doing a lot of stunts in his life so I began to think whether he should stay on silent roles...or at least star in a better scripted movie. So when I saw Exit 33 and read it's about a father and son doing away women in some very nasty ways, I ought to give it a try.

You can tell by the rating above that things didn't go too well. 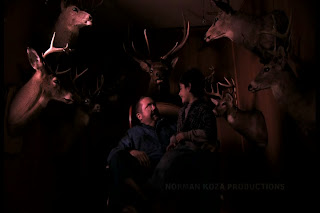 Ike (kane Hodder) works in Last Chance gas stop while living alone with his son and the ghost of his dead wife. We first see him helping out a lady whose car broke down in the middle of a dirt road in the woods. After greeting her, he slams a tire iron unto her head. 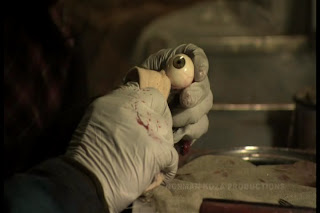 One opening credits accompanied with some catchy country songs later, we then see a clothed sex scene in which the gal had to leave later to visit a friend. Meanwhile, said friend got her boytoy to fix their car after it broke down some place near Last Chance; history repeats itself and Ike follows them, cutting the friend;s boyfriend's head off and kidnapping his girl. What follows is one boring film about eye gouging, skinning tattooed women alive, flashbacks that answers and human beef jerky.

All I could say is that it's boring as hell, muddled as an elephant's ear underwater and holds nothing new like a 70th rerun of an 80s cartoon. What's more painful was that the acting was horrid, even Kane Hodder's calm and downbeaten role was stake-swallowing painful to digest, which I blame on the awful direction, script, uber, super, bust-o-matic sluggish pace and, well, the story itself. 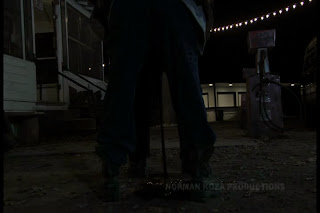 He's too good for shit like this and how he got tied to a film like this is beyond my knowledge. Some gore effects were pretty decent, like the aforementioned gouging and skinning above, but other than that, this is pig shit.

I'm sorry for all Hodder fans but STAY AWAY from Exit 33. Really. It sucks like a whore in the slums.

bodycount:
1 female headed on the head with tire iron, killed
1 male had his head sawed off
1female skinned alive
1 male had his neck broken
1 male gutted with hunting knife
1 female accidentally shot on the eye (flashback)
1 male brained with hammer
1 female had her eyes gouged out
1 male gets a buck knife thrown to his chest
1 female killed offscreen
total: 10
Posted by Kaijinu at 10:40 AM