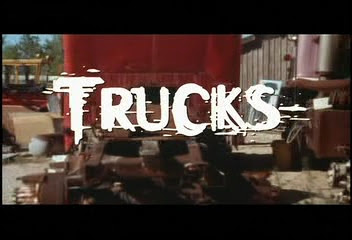 Based on Stephen King's short story of the same name, this little number is fondly remembered by a younger me as the film that made trucks cool. And scary. 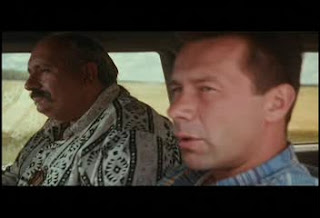 Trucks, taking a few steps away from the cheesiness of first incarnation of the short called Maximum Overdrive (1986), follows a group of people getting trapped inside a gas stop as, for no reason, trucks (and only trucks) are coming to life with murder in mind and begins stalking them outside. Delivering a more serious and downbeaten tone, it utilizes little changes from the story, using the barren isolation of a dessert for atmosphere, hailing a decent acting casts and working with a much fairer script, making it more violent and kinda deeper as it works its way through the plot.

But, among these small shred of positives, Trucks still has its own set of flaws depending on how you see this film; while it tries to paint a serious picture out of the ridiculous plot, it is still a ridiculous plot in the end and you can't expect something like that to flow without some dumb moments such as, whether its due to cabin fever or just plain shortsightedness, people fighting over control of their own trucks or driven to suicide.

Also, being more horror-drama than a pure sci-fi horror of sorts, Trucks focuses a lot on how these people try to survive this otherwise bizarre ordeal, thus bearing a horrid pacing that, while treating us to snippets of random murders committed by trucks of all shape and sizes, it has a tendency to lose momentum now and then, dragging us around with people either trying to comfort one another or trying to rationalize what is happening. I guess you can say its attempt to be more rational did more damage to itself than improve the adaptation, but seeing we get Area 51 conspiracies and axe-wielding inflated biosuits, I personally believe Trucks has a better hope of catering to a less serious audience.

Half good, half bad, Trucks is a decent attempt to do King's short right even if it can't seem to make up its own tone and direction. Recommended strongly for cheese addicts and bad movie fans.