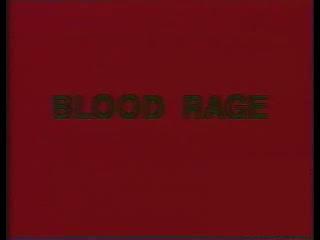 Some time in the 70s, twins Todd and Terry, identical except for their hair color for some reason, gone out from their parent's car during a drive-in and wandered around to look for some teens making out, just for the kick of it. When they found one, Terry did something he was axing for, hacking the teen boy's face with a conveniently found hatchet while his lover ran away for dear life, streakin' nude. Todd was traumatized frozen upon seeing the act and Terry quickly smothered his brother with blood, putting the blame on him. 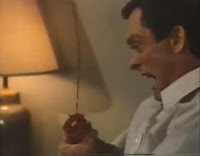 Moving towards the present, Terry has now grown loved by his mum, surrounded by friends and living a healthy life; all the while, Todd, still traumatized by the incident, is locked away in an mental asylum as he is still believed to be the killer. But this year, Todd finally snaps out of it and makes his escape, trying his best to alarm his loved ones of the real danger Terry is capable of and, apparently, he's willing to do anything to show how evil his brother is. Even murdering a few folks along the way. Could both boys had lost it? If so, what will become of everybody this Thanksgiving night? 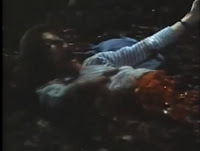 Blood Rage should have been very unwatchable with its over the top dialogue, lazy script and horrible editing, but to see a lady hacked in half with a machete and flail around in an obviously acted scream, or to toss a random little girl looking for her dog in the woods just to have her warned off so easily by a strange sweaty man who may or may not be killing people, this film may not be as horrible as some people put it. 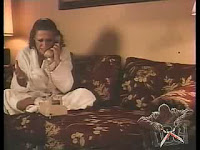 Yes, the movie is feisty when it comes to its cheddar, almost as if it's trying to make the hammiest horror film there is, but at least despite the high fondue levels, it still did follow an interesting plot, some gory looking kills (even if they were executed in such a cheap manner. The blade touches the skin off-camera, and then we later find them either squirming in half or had their noggins split in the middle like a watermelon), and decent T&A scenes.

Also, this is perhaps one of the few slashers to take on the evil twin plot with much glee and fun, concluding with a rather unexpectedly downbeat ending that was impressively in contrast to its hammy nature; the fact that Todd and Terry's mum shows more love to Terry than her other son harbors a morality tale of favoritism, which goes to a deep end with a really dark ending. 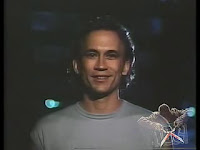 Underrated for some understandable reasons, Blood Rage could've been really nothing more than a poorly shot, low-budget fare with distributing problems, and a really dull flow, but thanks to the gore and the unintentional laughable material, it's likable enough to be a one-night viewing, alone or accompanied. If your anything of a completist like me, it's a keeper. With a campy slaughter, glorious nudity and enough overacting to kill a crowd, you could say I say I fell in love with this movie right on! What say you?

Bodycount:
1 male had his face hacked repeatedly with hatchet
1 male had a hand lopped off with machete, head split in half
1 male gutted with machete
1 female hacked in half with machete
1 male decapitated offscreen, head found dangling in a noose
1 female killed offcamera, found with a machete stabbed into her chest
1 male gets a machete hacked into his neck
1 female hacked to death with machete offscreen
1 male gets a grill fork to the neck
1 male shot to death
1 female suicide, shot herself on the head
Total: 11
Posted by Kaijinu at 3:51 PM