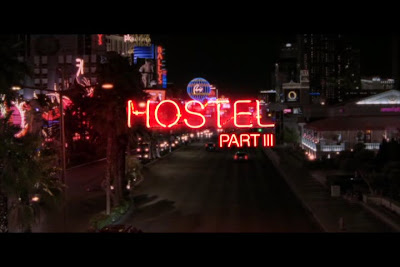 I never really saw a strong franchise out of the Hostel movies. The first said it all and should have been enough, so I do find it surprising that it even earned a sequel despite the stale and really empty plot. Thank the fates that the second film was a lot better despite the mixed and negative reactions of the fans, though as much as I'm concerned, the producers should have just stayed with two movies. But I'm assuming they wanted to make the next SAW franchise out of the other sorta-classic tortur porn movie and decided to have Intruder (1989)'s Scott Speigel direct a third foray.

Hostel 3 has a wider imagination, I'll hand you that; playing around the pun of "franchising", the European branch of the Elite Hunting club decided to branch out to America, more specifically Las Vegas, where all the ass-shakin and tatas can pretty much lure any shmuck in to their demise.

In comes our three set of dudes as our hapless victims; unlike the trio of the first Hostel movie, the men here are at least more likable and sympathetic as they're not the annoying sex-crazed teenagers of the first, but grown men just wanting to have one last night of fun before their friend's big wedding. After following two escorts who drugged and brought them to a secluded building owned by the Elite Hunting Club, the doomed groom-to-be and company are now kept alive in cages along with others captured beforehand, to be picked out one by one in a betting game called Wheel of Misfortune, where spectators watch hired killers do the nastiest bloodletting while they sit and bet everything from which tool will be used, how fast the victim will die, what would they say to escape their fate, etc.

So basically, the "pay-and-kill-them-yourselves" idea got watered down in this sequel and gave "gamble-how-they-die" a chance. Clever, if not a bit too "clean" as, frankly, I never like how the new torture chambers look so "high-tech" as it killed the eeriness of the first two and took out a lot of workable tension that would have been in some use here.

Lost also were the sufferable torments the victims have to go through, something that came to me with mixed feelings as, for one, I am glad to see some unnecessarily prolonged murders but, in turn, it killed away what made the franchise so memorable, if not disturbingly marketable. In the end, a good deal of the killings were so-and-so, with only a handful displaying some raw nerve, even if it's a bit tame compared to the prior two Hostel movies.

The low-budget shines from time to time, mostly from the poor CGI and the lack of any other convincing set-pieces. I normally find myself inclined to be disappointed on what Hostel 3 have done but seeing how well-trimmed and imaginative the plot is, playing with our expectations and twisting out of proportions into something new, it's a bold movie that I can applaud but not wholeheartedly accept.

I also like the fact it still follows the traditions of the the series. Aside for the "money is EVIL" subtext, we're also treated with an "escape" at the near end, wherein a victimized lead kills his way out for freedom. In here though, we got at least three victims clawing their way out, filleting anyone who gets in the way, exacting vengeance and providing one last twist at that.

Bodycount:
1 female killed offscreen
1 male had his face peeled off with scalpel
1 female attacked by roaches
1 male  shot on the head with a crossbow
1 male gets a cattle prod to the mouth
1 male gets a medieval flail to the chest
1 male axed on the chest
1 male shot on the chest with a shotgun
1 male shot to death
1 female shot to death
1 male had an arm chopped off with cleaver, bludgeoned with pipe
1 male ran over against tire spikes with car
1 male had his face mutilated with tree-trimming saw
Total: 13
Posted by Kaijinu at 4:30 PM