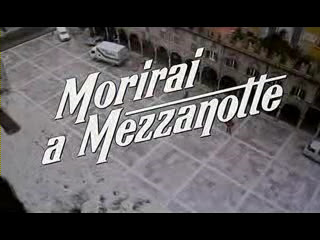 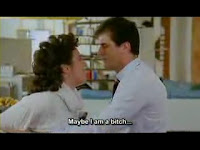 Not long after his little infectious killer demons raved over an unfortunate movie theatre in Demons (1985), Lamberto Bava has his line of success until the mediocre run with constant TV movies. He did put out some decent stuff over the years including an underrated sequel to Demons, simply titled Demons 2 (1986) and a misogynistic giallo called Delirium (1987) and the movie we're covering here, Midnight Killer. One of his better attempts, if not a little generic.

Nicola is a policeman who saw his wife sharing lip service with another man inside a lingerie shop. After confronting her at home, the two end up on a full blown domestic brawl with Nicola getting wounded from an ice pick and his wife nearly battered. As her enraged hubby leaves, staggering from a fatal wound, the wife suddenly gets the bad end of the ice pick as an unseen assailant jams the weapon into her. 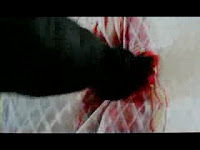 Upon discovery, Inspector Pierro Terzi points finger to Nicola as the killer, though Anna, a psychologist and professor at the nearby university and Nicola's friend, disagrees. She tries to convince Inspector Terzi that another psychopath is on the loose, a certain serial-slasher known as Franco Tribbo, the Midnight Killer who seemingly died in a fire eight years ago.

As the murders continue, apparently done by "the Midnight Killer" risen from the dead, a pattern is showing that the killer is making his way to Anna's students, one of which is Terzi's child. Fearing for her safety, Terzi convinces his daughter and her friends to leave the city for their own protection. (To a lonesome coast where it's far from any known help and covered in thick fog. nice choice, bub...no, really) It isn't long before this turns out to be a pointless idea as Tribbo finds his way to them still and blood is about to be spilled. 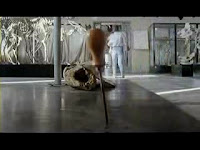 Merging giallo and slasher film trappings, Midnight Killer came out half-way decent and mediocre as generic plottings come and go but, thankfully, it mostly withstood the influence of the American slashers and kept its ground as a murder mystery done right and fun.
It does have its flaws; the script lacked any good character development and the murders aren't as competitive worthy compared to the splashier titles that decade, but the mystery angle of it is impressive and the underwritten casts still managed to be interesting and likable. Valeria D'Obici out-stands as a committed criminal psychologist Anna, a powerful performance for a very engaging character. Leonardo Treviglio, as Nicola, comes off with his character as a very suspicious fellow, with his shifty personality and uncertain take on the crime makes him a perfect suspect. The rest of the cats, though, come out flat, particularly Paolo Malco's Inspector Terzi, albeit he's more forgivable since despite being dull, he's still an entertaining watch. 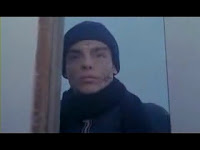 A few moments in the film did took route to your usual American slasher trappings, with a stalk-and-chase scene between the victims and the killer which took place at the last twenty minutes, all through the coast house, knife wielding and all. The movie also has its dense cheese, one particular example being a scene where a victim managed to fend off the killer with an electric whisk and, to my surprise, it worked! Until that is the cord's proven too short for full potential killer whisking action and the killer's response to that is stabbing with a knife. Heck, we even got the old fashioned rubber mask revelation here, done with all the hamminess and cheddar of the 80s.

While not a masterpiece, Midnight Killer's still a passable entertainment for a low-brow night of mayhem and mystery. A bit too simple to be a classic giallo and too mystery driven to be a no-brainer slasher film, this hybrid of both worlds is perhaps one respectable entre' from our friends in Italy, especially if it's coming from the son of late Mario Bava, the true father of giallo.