I guess I should consider myself lucky enough to see this rare gem. Not only was the online source of this film gone now, but I find the movie enjoyable. Really! 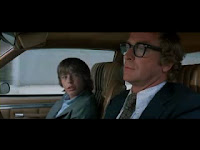 I never was too fond of pirates in general despite being a fan of Disney's Pirates of the Caribbean Trilogy. (Don't care about the fourth) But seeing how director Michael Ritchie managed to fuse slasher film elements with an ocean adventure film (again. The first was Jaws), I have to say I'm impressed with the idea. After a few years looking, I finally found it and this is what I saw.

Reporter Blair Maynard is an investigative journalist who wished to investigate a series of disappearing yachts near the Caribbean seas. His work got harder when he gets tied to look after his son, Justin, after settling a divorce, forcing him to do the improbable decision to tag the boy along, double crossing his son into believing that they're going to Disneyland. (a hint for the future Pirates franchise?) 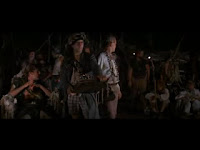 But after a near death experience from an exploding cargo plane left them stranded in a small island, their relationship strains further away. To make up with the lies, blair took Justin fishing in the middle of the sea wherein they spot a girl floating on a life-vest. But upon helping her, they made a horrifying discovery that this is a trap set by the unlikeliest foes: Pirates! 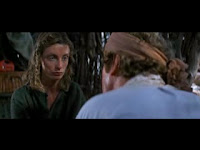 After managing to kill one, both Maynard and Justin were taken alive to the pirates' secret island, where Maynard was forced to be the sex slave of the late pirate's lover (trust me, it's tamer than it sounds), and Justin is trained to be the prodigy for their leader, whose favor began to brainwash the boy more and more each day.

The Island (1980), based on the novel by Peter "JAWS" Benchley (who also wrote the screenplay), is an oddball of a hybrid that delivers a monstrous bodycount and the weirdest choice of cinematic monster: a closer and more terrifying visage of pirates, made up of heartless murderers, remorseless thieves and brainwashed slaves, still possessing some out-dated mentality that somehow clashes quite well with the new world. 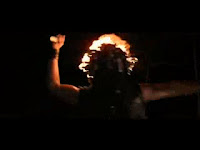 The film pulls out the unbelievable right before our very eyes, marking this film's territory into cheese cinema; while the first third took place in the island, showing what the pirates do if they're not raiding ships or cutting throats such as harvesting food, teaching their (kidnapped) youths how to kill and even have bonfire nights, the second is where things got a little cheesier. For one, we get treated with a hilarious scene where, after their yacht got raided, a teenager stands up to the crowd of Long John Silvers and start doing some Karate moves. As laughable as it is, it was impressive enough to knock down a few of the cronies. Of course, the pirates still got the last laugh, gutting him with a sword. 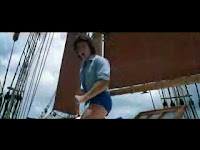 The last act was where it gets really implausible, with the pirates getting hold of a Navy ship and managing to kill off every single navy men inside with little or almost no effort (there goes the country's taxes), only to meet a gun-totting demise at the hands of Blair, which gave this particular scene a massive kill count in a single serving (And earning my respect) and leading to a mano-a-mano stalk-and-kill showdown between our reporter, his brainwashed-or-not Justin and John David Nau (David Warner), the leader of the pirates. 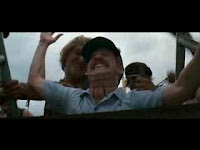 Above all the silliness, the film was still entertaining in a unique way; dabbling the old childhood interest of pirates while giving a fresh new take on the slasher genre, The Island (1980) can be an underrated 'bad film" that gave brainless sensitivities a good light in a manner of a good old-fashioned ocean adventure. The sets and make-up were beautiful (with a mangrove village to add and the pirates all looked great!), some good tension (especially the first murders), great water/ boating scenes, countless raids, and funny as it is, some passable acting from both Michael Caine and Frank Middlemass as Windsor, the anthropologist who's hiding and teaching the clan out of fascination. 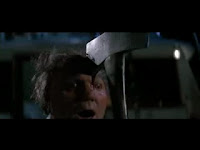 Sadly, I can't say the same for some of the direction such as the brainwashing of Justin, which felt very rushed as if it occurred in a single day. (But it looked like they were there for weeks) There's also some badly lit scenes (Maynard's first attempt to escape), and, apart from the brutal opening murder and the superb machine gun kill, the murders can be a bit cheap and tame, albeit rich in its own unique charms. 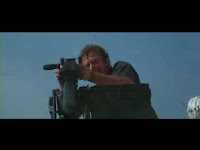 One can actually overlook these tiny flaws easily if they're willing. It's far from perfection but as an oddball cheese gem, The Island (1980) is also far from horrible (at least for us followers of the cheddar! ) and to search for this rare gem is like a treasure hunt of the same nature: difficult and strenuous, but its all worth it upon finding!