The world of Paranoiacs: Hatchet For The Honeymoon (1970) 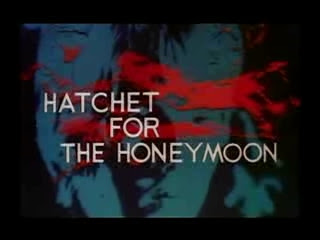 My name is John Harrington. I'm 30 years old. I'm a paranoiac. Paranoiac. An enchanting word, so civilized, full of possibilities. The truth is, I am completely mad. The realization which annoys me at first, but is now amusing to me. Quite amusing. Nobody suspects I am a madman. A dangerous murderer. Not Mildred, my wife. Nor the employees of my fashion center. Nor of course my customers. 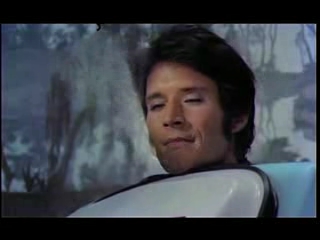 Says a bridal-shop owner, who would later make a dire decision to kill his own wife, his first variation from his usual Bride-to-be victims, in order to unsupress a childhood memory of a murder. Apparently this decision would later be a consequence when he starts to see the ghost of his wife, black gown and death stare. But had he really killed her? How could the rest of the world see her if she was murdered brutally the other night? 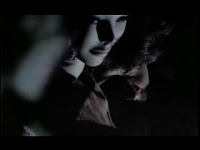 Thus the mystery of Hatchet began; Well, sort of a mystery. The real mystery to me is why call it hatchet when it's clearly a cleaver he's using (hatchets are small axes, not kitchen utensils), but putting that aside, it's a real disappointment for my taste of giallo.

Calling this a mystery is more of a confusion.We know early on that John's crazy and we know we can't trust his traits to whether he had killed people or not (like Patrick Bateman from American Psycho). Still, whether he had killed his wife or not isn't really that of a big deal; that including of the hidden childhood trauma that started his murder spree, albeit a small shocker. Until that revelation, we spend the entire movie watching this madman decrease lower and lower into paranoia and depression, while not really downbeat, it isn't that engaging or terrifying. 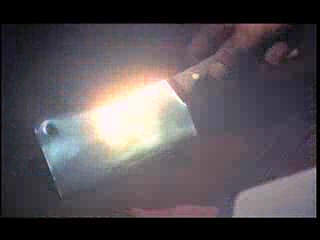 The rest of the movie just looked fine and acceptable, acting is decent, especially our lead Stephen Forsyth, who plays his character with much sophistication and calmness until to his psycho-spiral, predating yet again that of American Psycho. The sets are beautiful and the wardrobe is fantastic. Bava still has the eye for set-pieces that flourishes with detail. 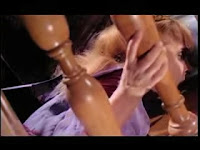 It also has its moments, including an early double murder inside a train, with our John, cleaver at hand, slowly sneaks behind a bride to be and her fiance'making love, hacking them to death; of course, that doesn't par with the grand murder itself, which is also one example of the director's approach on inserting black comedy; a merciless hacking of John's wife upon his murderous epiphany, an act so uncontrolled for him that he didn't had the time to clean up the mess when two police men arrive at his door, questioning him on the mysterious disappearance of the brides. Struggling to keep them from going further inside, he got close calls when the dripping blood of his late wife began to blot the carpet, inches away from a cop. It's thrillingly entertaining, honestly speaking, in a more "bleached-brain" way. 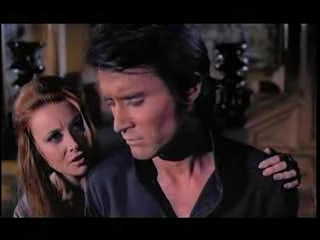 While not my fave Mario Bava work, Hatchet for the Honeymoon tried to make a brooding creepiness out of guilt and repression, but sadly, due to it devoid of mystery,  didn't cut quite close to what i was expecting from a mystery driven giallo, despite flowering itself with the usual elements such as colorful backgrounds and stylized soundtracks. In fact, it might as well be an earlier proto-type of a slasher if it wasn't for the driven mystery narrative. Perhaps I would settle myself to his real classics (Twitch of the Death Nerve, Blood and Black Lace, now those are the real deal!), but i wouldn't stop the rest of the world to see this.