Slasher masks of the week vol 13 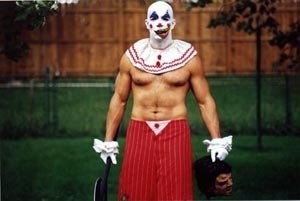 Fear of Clowns (2004)- The face paint had a nice and original design, though I don't understand the need to go topless. Too bad the flick kinda sucked...

SAW (series)- Whoever is behind the mask, Pigface is an unnerving character who acts like Jigsaw's accomplice/apprentice. The original take had maggots, but I guess a long-haired pig mask works too 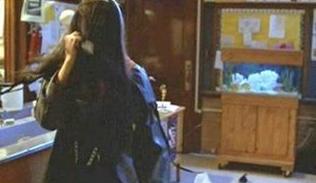 Cherry Falls (2000)- Our killer wears its hair down to disguise themselves, cool, but a little weird. How do they keep their faces hidden like that for long? Either ways, I like it! 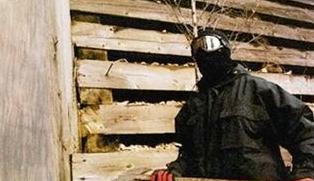 Shredder (2003)- My fave snow-bound slasher next to the Fritt Vilt series, Shredder packs a cool looking killer in a ski-suit and goggles. The perfect disguise and it's fitting! 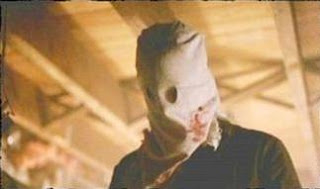 Malevolence (2004)- yeah, I never was that impressed with this. It's too cheap and too unoriginal.
Posted by Kaijinu at 4:09 PM