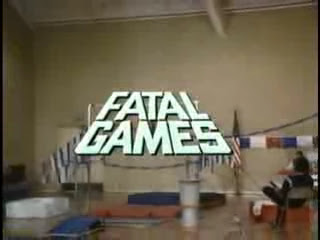 As my curiosity killed my 99th cat, I find myself in a sense of numbness and distraught on how cheesy this sports-themed 80s slasher is.

The athletes of Falcon Academy of Athletics are training to compete in the Regionals but soon realizes that the competition is the least of their worries when someone in a black track suit and hoodie is making their way through them, literally, with a javelin.

It has the making of a cheesy classic but the lack of an actual plot from Fatal Games meant that the entire movie is really no more than a routine workout itself as repeated patterns of these kids training, procrastinating and/or sexing, and being slayed, almost in that order, filled up the entire running time. This couldn't be all bad if these scenes were anything interesting but I wouldn't count on that. Worse even are that the murders are technically routine as well since all of them were javelin kills with zero effects and lighting, making most of them hard to make out.

But thankfully, despite Fatal Games having missed a lot of opportunities, it still is a cheesefest of fun-tastic proportions; it did featured a fair amount of nudity, with one particular scene had a bare-naked girl run around the empty hallways while a javelin wielding killer pursues. There's actually a lot of chase scenes in this movie, all of it inside the campus and no victim, not even a disabled, is excused from running for their lives.

A silly twist came in the end, a revelation that was more weird than shocking, nearly to the extent that it's too silly and comical for my taste, but at least it's entertaining halfway in the end.

So concludes another run-in-the-mill sports horror. Fatal Games may hold no surprises or creativity but it still made a name for itself for some reason. Recommendable? Only to cheese fans.