They Care about the people they care: Surgikill (1990) 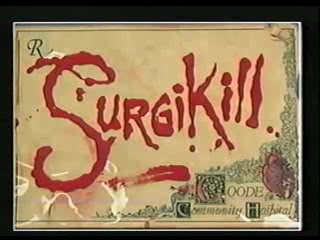 While not intended to be a serious horror flick, Surgikill was too obvious with its flaws.

First of, the plot of the movie is easy: a loonie escapes captivity from one of the hospital's rooms, kills an orderly and took his suit, and then causing mayhem and death all over the hospital much to the demise of everybody from patients to crew. As the doctors, nurses, orderlies, transvestites and interns try to clean up and cover-up the mess to protect their dear hospital's reputation, things get crazier and convoluted when some snoop is trying to find some sauce to sell to the papers. Who is this mysterious killer? Why is he doing this? Did I left the Iron on? 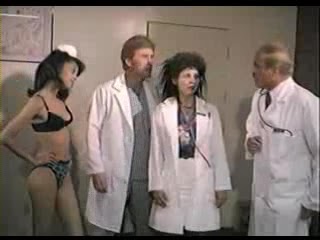 As much as I enjoy watching films like The Naked Gun and Airplane!, not to mention the first three Scary Movie and the first six Police Academy films. (And then there are the classic Slasher Spoofs Student Bodies (1981) and Pandemonium (1982)), the intended randomness and bad acting in this flick was definitely the worse I've seen. The overall funniness was all too shallow and pushed the limit of randomness too far, coming out pretty overcooked and uninspired. 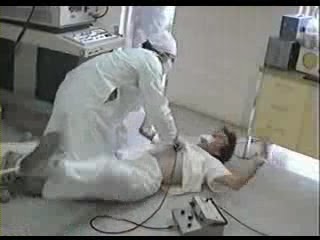 The pros, as uninspired and overdone as it is, was that some of the materials worked. There were a few times I find myself chuckling at a joke or two, and the murders are too serious-looking to be funny, which I meant that in a good way. The goofy villain also has his points, as at least he gets to kill some people unlike that poor feller in Shriek If You Remember What I did Last Friday the Thirteenth. (Man! That's a mouthful!).

Andy Milligan directed this movie and at that time, he contracted aids which took a toll to his directorial career and might had lead to this film a tad under-looked around those times.(Either that or I've never seen other Milligan comedies. Perhaps both) Whatever the reason was, Surgikill failed as a comedy, but I find myself liking it a tad bit (Probably the hunger kicking in, but whatever). Best for many to avoid it, unless curious.

Bodycount:
1 male seen dead
1 male smothered with pillow
1 female explodes via enflamed fart
1 male castrated with scalpel
1 male shot on the head
1 elderly female pushed down the stairs in her wheelchair
1 male hanged with noose
1 male injected with chemical, burned with...what looked like a meteor
1 male poisoned on laced coffee, burnt with, again, meteor-looking thingie
1 male bled to death
1 female dies
1 male electrocuted to death with defibrillator
1 male strangled with cord, set ablaze
1 male accidentally disembowels himself
1 male top of his scalp got sawed off
1 male hatchet to the back
1 male cleaver to the head