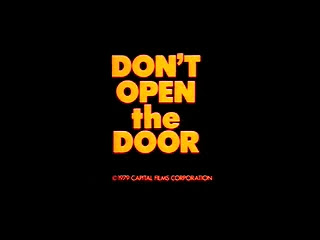 Well, to be frank, I have no idea what this was. With very little knowledge about the film, I find it to be a little...well, slow. And dull. Despite having some decent suspense later on the film.

Don't Open the Door had it going for a while, with a young gal by the name of Mandy being called to look after her ailing grandmother by a mysterious caller. Upon arrival, she finds her delirious and hostile, forcing Mandy to consider taking her to a local hospital but her grandmother's doctor, who had been looking after the old bird for a long time, digress that it would be against her grandmother's wishes. Mandy, understandably, ain't having any of that and she soon phones her ex, which happens to be a doctor, too, and tries to find a way to get her grandma hospitalized.

This is when the film starts to slow down, in which we later learn of a certain doll house proprietor living nearby and visits her grandmother from time to time. Much for Mandy's surprise, she discovers a life-sized doll apparently made to honor her late mother, a victim of a home invasion and murder. If that's not odd enough, she also starts to hear weird noises and felt the presence of eyes watching her. When the phone calls start, however, it spirals down to a pretty lengthy finale with an unseen killer preying her.

The problem with plot is that, while the tension and build-up is good, the climax in which the murders start took too long to happen that, by the time it did, I'm actually pretty bored. Adding to the frustration is that we actually get to see the killer a tad too soon, which killed off a lot of tension that would had helped elevate this film.

While it did have a nice slasher film-inspired opening murder, the rest of the film had more psychodrama. That being said, it took its time creeping us out while engaging us in a psuedo-mystery surrounding the identity and motive of the killer who appears to have returned for Mandy just as he came back to her old home. The finale in which the killer traps Mandy in her own mansion, threatening to murder her grandmother if she fails to meet his demands, actually had its good moments. 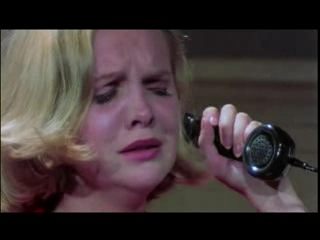 What I find really impressive is that the film got a big budget look while it is, in reality, made around a small budget. The direction of the film, at some parts, does show how director S.F. Brownrigg (known for making more obscure psycho thrillers such as Don't Look In The Basement and Keep My Grave Open) tries to avoid the usual cliches found in the newly favored slasher films of the decade, making a unique (or just plain different) entry for its year. With that, I leave this film with a modest rating, seeing it is fair with its tricks but a little overlooked at some; definitely not for everybody, but otherwise good.

bodycount:
1 female knifed to death
1 male beaten to death with hammer
1 male knife to the back
1 male beaten on the head with a figurine and falls off the stairs
total: 4
Posted by Kaijinu at 2:39 PM