Writing On The Wall, The Whisper In The Classroom: Candyman (1992) 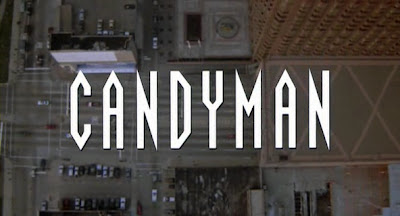 
They will say that I have shed innocent blood. What's blood for, if not for shedding?
- Daniel Robitaille, The Candyman

One horror film that best described my fascination to legends. Many a times I go to search for horrifying urban legends and creepy pastas, (That includes occassional stroll in the horror section of Snopes.com and the Creepypasta wiki). Bernard Rose's film is an embodiment of such tales, horrifying, yet cautionary; irrational, yet important, tackling more than superstition.
Helen Lyle (Virginia Madsen) is a doctoral student doing a thesis on urban legends and folklores, who, after hearing a story from a student of that of a mythological figure known as The Candyman, who appears everytime somebody utter his name five times in front of a mirror. She, along with her friend Bernadette, ventures into Cabrini Green, an economically deprived urban setting where a real unsolved murder occurred with a likeness on the legend. A single mother named Anne-Marie gave them a little insight on the murder, and too a little boy named Jake who shares him a story of an autistic boy who, God forbid, got his penis cut off, apparently by the Candyman. The stories seems to be getting more and more bizarre for Helen and her friend, to the point that they tried it, but with no result.

﻿﻿﻿﻿﻿﻿﻿
However, things got complicated when a local gang attacked Helen, apparently taking in the boogeyman's name as a moniker for street credit. After surviving the attack, she had the gang leader arrested and debunked the legend. Or has she?

Not happy with the "lies" she had spread, Helen found herself haunted by the spirit of the Candyman himself, who will stop at nothing to have her as his victim, if she is, however, willing. But until that point, he shall leave a trail of murder, under her name.

Candyman is perhaps one of the finest titles to come out in 1992 in terms of mainstream slashers by breaking the conventional and bringing something more haunting and mature, despite being straightforward to it's horror elements. The layered plot of the film wisely builds tension more favorable than that of gore and carnage; there are hardly any onscreen murder, but in place of it were snippets of bloody bodies and terrified reactions of both victims and witnesses. Other than that, the racial and gender-based social commentary were plastered beautifully as the film shows. Helen, for one, shows a strong and independent woman, willing to go in further heights to make something out of herself. Such actions had lead to downfalls, the attacks from both real and supernatural threat, until the fact that her encounters with the monster seems to be more fantastic than realistic, bearing her the stereotyped female of which she, until the end, fought.

The monster himself, played by genre actor Tony Todd, had all the basic characteristic of a Hollywood creation; a horrible past, a disfigurement, sheer immortality and a deadly force; these, though, are only the physical trait of the killer, what made him more terrifying is that he embodies the relationship of African American and White women back then held forbidden, and the belittlement of their race among the white oppressors that exists even today. There are little changes to such discrimination from his time from today's, only ours is made worse as the neglected and the deprived, mostly African Americans, are segregated to a housing project purposely made to keep them there.

The relationship of both Helen and her ghostly stalker ended somewhere a parody of a tragic love story, with Candyman wishing to bring Helen into his own domain and definition of immortality, going extreme lengths to persuade her to be his victim and to exist as "rumor" together. Helen, however, tries to fight her fate with the hook, pushing the off the advances of the monster while finding more troubles with her life as she began finding that she had no more turns to go; her friends are murdered, neighbors are frightened by her and deems her insane and her husband was caught to had abandoned her and moved to another woman. It later came to the point that she began to wonder if  to give in to the demands of the very creature that had brought so much pain would be a better end for her.

Her situation is also a terrifying one since it juggles the fact that she might be imagining all of this. She was found with a knife on her hand after seeing the real Candyman for the first time, with a dog's severed head next to her and Anne-Marie screaming at her missing baby. Has the obsession over the legend had taken over Helen, or is the boogeyman framing her? Of course, it's soon made obvious that the supernatural is to blame, but her ordeal's is just as terrifying.

Bernard Rose's direction mixes both visuals of myth and reality, resulting to a gloomy, gothic atmosphere within the empty (and near-empty) rundown buildings, littered with graffiti depicting the legend of their monster. The slow pacing of the film is surprisingly needed as there are are no tedious blotches thanks to a wonderful performance of both leads, some well-handled camera work and an enrichingly captive story. Adding to the subtle yet serious tone of the film is a composition made by Phillip Glass, putting vocal choirs and pipe organ scores to a near-pitch haunting feel to it.

Staying true to Clive Barker's fascinatingly creepy short story "The Forbidden", Candyman created a stronger mythos and a captivating story of legends and the consequences of meddling with the unknown. As barker would say, it maybe low on special effects, but the shock and subtext of this film is the true source of horror. One of the best of 90s slasher. 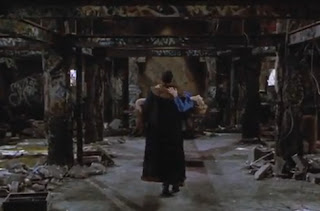