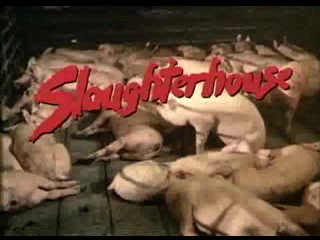 Lester Bacon owns a good old fashioned slaughterhouse that's being eyed upon by investors interested in buying the land and modernizing their meat production. The thing is, Lester isn't interested in changing the old traditional ways of slaughtering for food and so does his 370 pound son Buddy, who has the IQ of a mentally handicapped grunt pretending to be a pig. 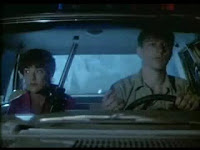 All of this changed, however, when Lester finds out that Buddy murdered a couple of people, seeing this as the answer they need to get rid of those pesky educated types who keep trying to buy his property. One by one, he phones them in and sics his son at them in full meat cleaver fury.

All the while, the local sheriff's daughter is coming to town for their annual Pig-fest, where everything's pork and pork rinds! But when the teen and her friends stumble upon the Bacons, it ain't for long before they meet Buddy's large cleaver and become tomorrow's luncheon meat!

So what makes Slaughterhouse decent? Not only does it serves a fine round of gore and mutilations but it's also crazy funny as it is demented. The Bacons is your typical downtrodden family in the tradition of The Texas Chainsaw Massacre's Sawyers clan. The duo's dirty, poorly educated and relies a lot on their instincts and broken psyche to fully function, with Lester obviously the head of the operations as of Buddy being brawn. They need each other to survive and plan, and as far as rip-offs go they're sure can be entertaining on their own. 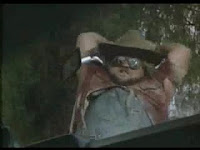 The rest of the film is your standard 80s slash-house as nothing is unfamiliar here; usual culprits such as bad lighting, unimpressive actors and weak writing is overly present but in terms of cheap kicks, some well done suspense, pacing, gore effects and cheese upping for hilarity (why on Earth was our final girl named "Lizzy Borden"?!), Slaughterhouse is all for a good time. 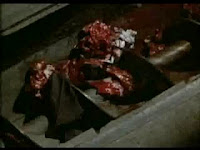 Keep an eye on a cult-fave scene where Buddy, after killing a deputy, had fun with his uniform and cruiser, racing around the barren desert like jack rabbit only to be flagged down by a lady who mistook him for a guy she knows. Slaughterhouse deserves a lookie-look despite its obscurity and while agreeably this is just another slasher in the 80s, it definitely passes my book for being honest for what it is.