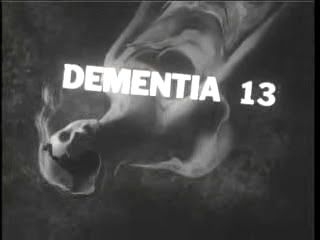 Dementia 13 (AKA "The Haunted and the Hunted")(1963)
rating:***
starring:  William Campbell, Luana Anders and Bart Patton

Gothic undertones and psycho-thriller comes face to face once again in this low-budget flick about a scheming young woman who, after stressing her husband to a heart attack (unknown if intentional or accidental), attempts to have herself written into her rich mother-in-law's will. She pays a visit to her late husband's family castle in Ireland, unknown of the fate of their loved one, but what she didn't expecting was an axe-wielding lunatic who began murderously hack away members of the family, somewhat connected to a tragic accident that befell them some time ago.

Francis Ford Coppola's "true" directorial feature (not counting two nudie flicks he made before), Dementia 13 is intended to be a cheap Psycho-esque thriller, complete with brutal slayings and psychological subtext. The only problem was that the plot had undergone with so many changes during pre-production and the filming was rushed (thus earning it being called a "quickie" movie). To be fair, however, the horror scenes are decent, if not a tad unoriginal and outdated; the murders are shockingly brutal for its time, and the Hitchcockian aspects of the film is played well. Even going as far as killing off the lead early on the story, to move on to a twist in the story wherein the murderer skulks among the family, apparently blaming them of a drowning incident years ago.

With this, the film's take on the broken psyche is just as acceptable in a manner that it is somewhat a classic take on the genre and truly terrifying  for the fact that it had lead to such savage slayings.

In a way, Dementia 13 is an obscure and overlooked classic, but it's small-budget had fare too obvious at times that it held the whole film back from being anywhere than a watchable indie cult classic.