Psycho of the Month: Alex Hammond 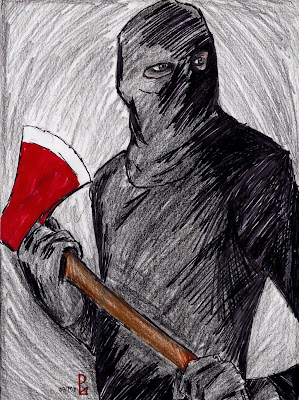 After witnessing the death of his youngest sister, Alex Hammond broke into psychosis that boiled the hottest on their prom night. On the sixth death anniversary of his fallen family member, Hammond dons the balaclava, a pocket full of mirror shards and a deadly axe, out to do justice to his sister's untimely death.

He managed to get everyone responsible, and take a few names with them, but what he wasn't expecting was the interference of his other sister, Kim. After a grappling for the axe, Kim axecidentally killed his brother as he bled away in a tearful revelation.
Posted by Kaijinu at 9:31 PM

Email ThisBlogThis!Share to TwitterShare to FacebookShare to Pinterest
Labels: Badly Drawn masterpieces of mine, masked slasher, Psycho of the month, Random Stuff