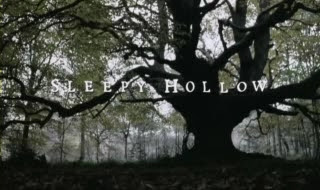 Johnny Depp and Tim Burton in a slasher film?

If you know your history on 80s dead teenager flicks, Mr. Depp already had his share of slashering with that one famous nightmare man from A Nightmare on Elm Street (1984), but it's nice to see a big shot like him take a stab at this fair sub-genre every little while. And same can be said for Tim Burton on this subject; I'm a fair fan of Burton but even I can't deny that some of his works lately have been, well, "commercialized". Despite enjoying movies like "Alice in Wonderland" (a guilty pleasure) and his latest release "Frankenweenie", that little magic he had on films like Edward Scissorhands and Beetlejuice is missing lately so I'm just glad to see something as mystifying as this applied in the least expected sub-genre.

Mixing a bit of neo-classical steampunk and Burton-esque brand of Victorian Gothic, Sleepy Hollow tells a version of the infamous Headless Horseman tale wherein Ichabod Crane is a police constable in 1799 with a penchant for the scientific whenever he is doing his law abiding duties. He's sent to the small town of Sleepy Hollow after a series of unexplained murders had certain members of the town's elites beheaded and the locals believing it's the doing of none other than the fabled headless Hessian, a risen undead haunting the woods on a horseback, searching for his lost head.

As Crane is determined to prove a human suspect, he will unfortunately discover soon enough that the legends are true and he has no choice but to apply what he knows to something he hardly believed in, hoping to find a way to stop the Horseman before it's too late.

With elements of a period film done away with slasher film-style murders and stalking, conspiracies concerning socialites, and a bit of the supernatural, Sleepy Hollow was made to cater a wider range of audiences, lured in through some recognizable casts; aside from Depp taking the role of Crane, the movie also features Christina Ricci as Katrina Van Tassel, a damsel with a liking for mysticism and, possibly, for Crane, and Christopher Walken as the Horseman when he was still alive, giving much intimidating presence in such very little screen time and barely any speech. The rest includes Miranda Richardson, Jeffrey Jones, Michael Gambon, and Christopher Lee, all of who have done a mighty fine job in each of their roles and gave a straight performance to keep the film's tone in place.

The movie is ever polished, with the set-pieces nearly accurate to the period they are supposed to be taking place, even if they are styled a bit accordingly to Burton's macabre sense of artistry. Tim's longtime musical collaborator and friend Danny Elfman even provided a haunting score to go along the town's ghostly image. Everything else from lighting to props, camera works and even its cinematography seem to fit quite well without being overly playful. In fact, the film's quite mature with its story and direction despite having fantastic elements along the plot, and with Crane being the unlikeliest of all heroes to come along and save this town, it did give the character some depth and development as everything of said fantastic elements seem to clash against his rational understanding.

The pitch originally had Sleepy Hollow as a purebreed slasher film in its full exploitative nature (with a kill in every five minutes) and while it may not look much like it, the movie definitely shows. Though tackling more mature matters such as the ever-going battle against science vs belief, and too a romanticism angle commonly found in nearly every period piece, Sleepy Hollow still serves as a homage to classical horror without being overly cliched, with a bit of something from modern horror flicks. Aside from beheadings, the film features some creative murders to keep true slasher/horror fanatics satisfied, plus a classic monster brought to life with most onscreen savagery, menace and one of the finest special effects of that decade. Whenever the Horseman arrives, there's bound to be a head rolling off a neck, may it be man, woman, or even a mere child, hailing to a climax wherein the hero battles out a seemingly indestructible monster, with its own twists and takes.

It's not a perfect movie in a sense that it's historically accurate in the strictest, nor will it be all believable, but it's a perfect watch for the Autumnal seasons and Holidays, or whenever you feel a need to see something more than a bunch of dumb, sex-hungry virgins being hacked to bits by a maniac in an animal mask. If you're also a bit dodgy with Burton's directorial efforts lately, or not a fan of him at all, let that not be a reason to skip this. Among all I've seen from his work, this is a keeper and a high class-acted, big-budget gem for all your slasher/horror goodness.