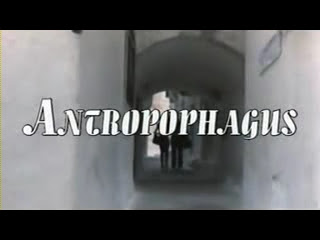 First, let me tell you how long have I've been hunting this title down. I first "encountered" this film when I was a wee lad. I was a big horror fan back then and I was obsessed about "Killer Klowns from Outer Space" for some reason. So, I was image hunting for a while and I stumbled upon a "picture show" featuring some of the nastiest screencap there is; you could say "The Grim Reaper" was one of it. The image of a deranged cannibal was too much for me, so it stuck itself into the folds of my brain and ever since I figured out what a slasher film is, I've been hunting it down to face the demon that scarred me. And when I finally got that chance, picture my morbid delight and curiosity.

Anthropophagus starts with a couple at a Greek Island enjoying their time at the beach; the girl then decides to take a dip while her lover stays behind to lie on the rocks and bask under the sun. As she swam further into the waters, she notices a lifeboat and heads towards it in hopes of finding something or someone. What she didn't know though is that the only living thing in that boat was underneath the water, pulling her down and murdering her. The unseen assailant later pops their head out of the water, walk slowly to the sunbathing boy and buries a cleaver down into his forehead.

Cuts to some time later, a group of tourists sets sail to the same Greek Island, only to find it eerily desolated as they venture deeper into town. Misfortune comes to them when someone looses their boat and two of them went missing. Mummified bodies and a traumatized blind girl soon adds to the trouble these people are experiencing, but it goes for worse when they realize someone (believe it or not) nearly murdered and cannibalized the whole village! Now that they're stranded on the island, they too might be next on the deranged cannibal's menu...

Despite it's gruesome reputation as one of the viler Video Nasties of its time, Anthropophagus is a flawed film that suffers from a lot of factors that easily divide its audiences. For one, I was disappointed on how tediously draggy this film can be as there's a lot of scenes here that looked and felt nothing more than time fillers. Majority of these unnecessary scenes mostly involves people walking around dark places, random suicides and stretched chase scenes, so building tension and suspense aren't this film's strong points.

What this film did right were some good jump scares and gratifying gore. There were some good nail-biters moments such as a blind girl left in a room in the dark, unknown to her the killer's already inside and just waiting for the right moment to strike, and there's a nasty piece of work with an unrelenting shock value wherein our killer drives his hand into a pregnant woman's womb and pulls out her unborn child, while the helpless father watches as he dies from his own wounds. It's a tough scene to watch, even if the baby does look oddly misshapen. (it was a skinned rabbit)

George Eastman plays our goon, a demented cannibal man who, after being stranded in the sea with his family for so long, goes crazy and murders them out of hunger. It's a believable background, but that doesn't explain how he managed to overpower and murder an entire village, leaving only two survivors. (Even if it's a small town, didn't anyone fight back?) He would eventually play another similar psycho in a supposed "sequel" to this movie known as Absurd, also by this film's director, Joe D'Amato.

As rewarding as it is for gore hounds, Anthropophagus is nowhere a masterpiece, but stands proud for being one of the more recognized Italian shockers. With a very simple plot and a lot of useless scenes, fans would like it if they're only into gore, "bad" movie cliches or just hardcore slasher fans like me. So was it worth the hunt after all these years? Yes, yes it was. And now that I faced my demon, I shall take a gander to it's sequel...