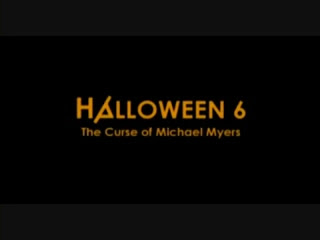 What I hate in a movie sequel is when it refuses to let go of it's predecessor and what I meant by this is whenever I watch a sequel, I'm expecting another saga or twist, have it nearly cut off from the events of the previous installment, which is a reason why I gave favorable ratings to Hostel II, Cabin Fever II, Scream 3, Children of the Corn 4: The Gathering and, yes, Halloween 6, the latter I'm proud to call my second favorite Halloween sequel ever made.

Gone was the serious tone of the previous and moved to a wilder and bloodier take on Michael's legacy, Halloween 6 ultimately cuts off the ties from almost everyone from its two previous films and revisits some of the older (and nearly forgotten) characters with their own unique mythos. Part 6 may took a wilder stab at the Thorn Mythos than Michael's own knifing spree, but the cheesiness of the story, plus the messy gore count ultimately made Halloween 6 a worthwhile film for me.

Then comes my curiosity for the famous Producer's Cut, which was described by a fellow blogger as "more Thorn". Now, I never really cared for the Thorn Cult element and the only thing I did like about them was the semi-twist in the theatrical release wherein they're revealed to be not real druids, but more of scientists experimenting with the DNA results of a man cursed by magick. What further made me think twice on seeing the Producer's Cut was also the point that only eight murders were committed, meaning something about this entry may had done more talking than killing. So far that never was a bad thing for a slasher, as I do have my share of good fave "talky" titles, but coming from Halloween, a franchise that spent both of Michael's 80s and 90s return with lots of boring talks, I feared for the worse.

Still, Producer's Cut or not, a slasher's a slasher. And it beckoned for me.

Same as the original Halloween 6, the Producer's Cut still focuses on Michael's return to Haddonfield years after being captured by the Thorn Cult. Though the theatrical cut had Michael killing off his niece, Jamie, early and spends his rampage looking for Jamie's baby, the last of his bloodline that he must kill under his apparent curse, the Producer's Cut took more time trying to flesh out what happened in between this movie and the previous installment, mostly involving the cult and Jamie being a tool to the cult's ritualistic worship of slaughter.

The Producer's Cut has it's interesting moments; though indeed the slaughter count's been cut in half, the final product was still a tied continuity that sorta let go of Jamie Strode's side of the story and slowly shifting its attention to the rest of the characters through a new light. Around the first running hour, H6 Producer's Cut was your standard slasher; Michael Myers dons another form of enigma, the one that's more intense as the film teasingly hints a form of supernatural influence to his invulnerability. This angle gets more and more thought out until the last 30 minutes, when the film turns into an Omen or Rosemary's Baby clone of sorts, with the druids explaining their goal and Micheal's possible origin.

I would be thrilled by this revelation but it has some parts that didn't cut out for me. For instance, I kinda saw it coming: Michael was shot multiple times (two of them, mind you, was through his eyes!), stabbed, set ablaze, and yet he lives and come back for the next year, all patched up as if his parts were made out of replaceable car parts. Clearly, he surpassed mortality and he's now Jason Voorhees with some Celtic magic flowing in his veins. This movie, or at least this version of it, milked this angle all too much for me that it really missed a lot of action and had gone more of a semi-intellectual thriller for most of its running time. I'm all for fun nights of quiz shows and family games, but when I lock myself in my room to watch a horror film, I expect a lot scares, blood, action or thrills, and H6 Prodcuer's Cut only has half of it.

Other things I couldn't really accept, other than the halved kill count, was the idea of Michael raping his own niece. It doesn't seem fitting to a monster of his standards but that's Pagan magic I guess. The climax doesn't work too well for me either but I did enjoy the last few minutes of the film, a final set-piece that ultimately brought Loomis down with an eternal curse. It was a nice touch for the mythos, an epic plot twist if I may say so myself, but it's just another cliffhanger for me and I'm really getting tired of these kind of endings. (Least seeing Michael in his new cloak was a cool ending shot. I always wanted to see him dressed in a cloak...)

More magic, less slaughtering, H6 Producer's Cut was a deserving cult classic of its own, just not mine. No, I prefer Michael to be slaughtering doctors, pushing heads through bars and pin a guy to a fuse box until his head explodes like a potato. Michael deserves to be less explained and feared more because he is The Shape. He defies explanation...