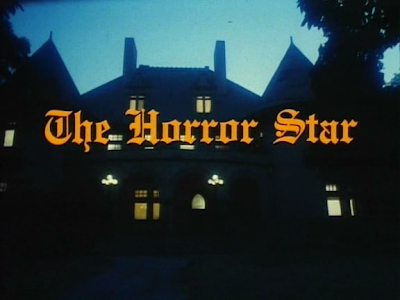 Much to his former glory as a big shot horror icon, now reduced to playing lame characters in commercials, his ailing heart holds no better than his career...or his sanity, as early on we see him he tip over a young director off a balcony as well as strangling one of his more unfaithful coordinates before passing on to the next life minutes after he does so. 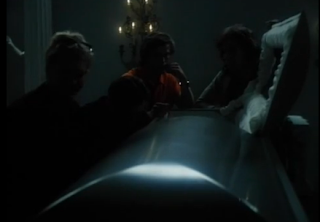 But students at a local University's Horror Society, after witnessing him hold a retrospective of his work and grown some sort of admiration for him in, decided to steal his body and bring it to a gothic pile where Conrad shot some of his best known films, promising each other to return the body to its rightful resting place the next day, little do they know  Conrad's widow had just consulted a psychic to help her track down the body and those responsible for stealing it.

Urging to wreck vengeful havoc upon these teens, she had her husband come back from the grave to end the teenagers' lives, one by one.

The Horror Star is a slasher film tribute to the heyday of old school horror, mixing classic horror movies tropes with the teen-kill ways of the 80s slasher. Here, we got a Hammer film-style villain, donning a vampire's cloak and his best Vincent Price impression, pursuing his disrespecting fans with ways ranging from supernatural spontaneous combustion to levitating coffins. As much as it is impressive, the villain failed to be anything but threatening, or scary, as his clean cut looks, stage actor mannerism, and his quirky cheese-inducing lines brought more chuckles to me than winces. And yet, it is these cheesiness that makes it easy to root for the guy when he starts killing. 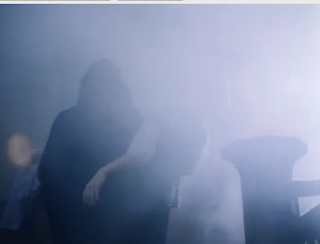 I can't resist the charms of a bad movie who doesn't take itself too seriously and The Horror Star is goodah! (haha, cheese pun!) The casts had their cases of overdoing their roles that works as entertainment, especially if one of them constantly faints in sight of something ghastly, or one them just can't get over the fact that the line between life and the undead are blurred. The best blurbs came from Conrad's own wife whose blind fury towards her husband's defilement had her beckoning his soul from hell and seems to be okay with it. (Hell hath no fury, like a woman scorned!)

Special effects is fair, but I do got some beef with some scenes due to bad lighting. Most of the shots takes place in a dark and gloomy mansion so some light shed wouldn't be a bad idea once and a while.

Overall, The Horror Star is a simple treat; nothing very impressive to say regarding plotting and gore effects, despite it's hearty attempt to do something new, but it's an easy-going slasher flick that a silly premise to go along with and, for the record, is at least bearable.