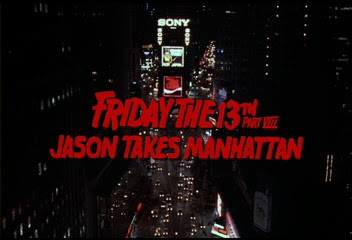 So we had Jason going 3D, killed off by a twelve year old, impersonated, revived by lightning, and take on a psychic girl. What's next, Paramount? Oh, what's that? Take him to New York? Had Jason kill in the big city where all the underbellies is more then usual packing with guys deserving to be picked off? Wow! let me see it!

So once again, Jason is brought back to life after his last grapple, now by a randomly placed powerline underwater. That's probably safe, right? Anywho, after getting back to his slimy - and I mean slimy - feet and killing off the two lovebirds responsible for this accidental revival, Jason then somehow ends up in a nearby harbor with the S.S. Lazarus, a boat big enough to be Titanic Jr. on route to New York City; a fact that taught me that lakes can connect to the Atlantic!

On the boat is one hydrophobic (and due to childhood trauma, Jason Voorhees-phobic) Rennie, whose uncle Charles just happens to be one of the professors on board. But him being a stubborn McSmarty-Pants "Corpses don't walk" blurting prick, Charles is not well known for comfort so Rennie finds it from her other professor, Colleen, who's looking after her as if she's the girl's mother. Adding to her plethora of caring people is one Sean, the captain's son with father issues and this film's final boy (Come on. you can tell by now that no lead girl's love interest dies in the later Friday movies!), and Toby, her dog who had the uncanny ability to survive any kind of deadly situation by running away.

As the cruise takes it trip, Rennie, for some reason, starts to experiences weird visions (or versions) of Jason as a boy since the moment she stepped into the boat, all of them nowhere close to the original young Jason portrayed in the first movie. With all these special attentions and wiggy things going on about her, she's not exactly Prom Queen material as local snobitch Tamara would agree on; heck, she's even whinier than Tina Shepherd from the previous Friday film but it appears we're stuck with this gal.

Fortunately for us, just as the boat sets course to NYC, Jason grabbed an anchor, climbs, slaughters teens, slaughters adults, destroys boat engine in the process and sets boat on fire. unfortunayle for Jason, we got some survivors somehow row-boating themselves all the way to New York, so he follows them all the way to the Big Apple (!), pick off survivors one by one and kill the evil uncle. (HAH!) And then it's nothing else but one long NYC chase montage (with a Ken Kirzinger cameo!), ending up in the sewers where Jason gets melted with toxic waste and turns into a small boy. (?!) Lovers then kisses and cue The End.

With so much cheese, uneven acting, major plot holes and inconsistencies, Jason takes Manhattan is always regarded as the lowest Jason ever sank in and it's the one movie that disappointed giddy fans the most.

There are plenty of reasons for the underwhelming fan response, one of them being the title itself which cheated a lot Friday freaks into thinking their main man's gonna be stomping New York, picking off hobos, street thugs, druggies, corrupt cops, saggy-breasted hookers and so forth. Of course, that was a load of bull since budget cuts had the producers and directors improvising and finding new ways to put Jason in New York. I'm thinking they put priorities on "putting" Jason "in New York", so they probably rewrote and take most of the action on a boat going to "New York", in which the city was reduced to backway alleys, a diner, a train station and a (toxic) sewage.

Generally, putting a backwoods hulk like Jason in a big city was a desperate shot. Just as desperate as the idea of bringing a corn cult to the concrete world. (Yes, Children pf the Corn 3: Urban Harvest, I meant you) Jason is the Crystal Lake monster and this film's opening already proved how much Jason has become a legend of his own turf, some sort of backwoods boogeyman whose stories of mutilated campers now vary from ear to ear. (that might explain the countless portrayals of young Jason here. A little too much in one take if you ask me, though) To bring him out of his territory, without the proper imagination, leaves Jason Takes Manhattan an uninspired mess of an odd duck entry to a semi-strong franchise.
Okay, maybe I'm using the wrong words here cuz it's clearly "imaginative" in a technical way; Jason suddenly having the ability to teleport in ninja-like stealth and to change his voice back to a little kid sure shows that these guys meant business. Sortah. Director Rob Hedden once pointed out that Jason's new found ninja skills was to push the franchise to a more supernatural angle, probably in an attempt to rival nightmare man Freddy Kruger in supernatural slashing, but that's not Jason, not one bit. He kills and cannot be killed but that doesn't make him a ghost (Though, that could explain Rennie's countless barrage of young Jason visions) and the lack of direct indication towards this in any scenes of the film still has Jason Takes Manhattan ending up with a grating deal of inconsistencies and weird moments that's too much even for films with a imbalanced timelines like the Friday the 13ths!

As for the cast? Well, what's the point? Minimal budgets mean uninspired talent that's more likely to be stereotyped or be linear in character. And the point that the plot is mostly centered on a boat filled with these kids, and apparently just five adults including a doomsayer who I nicknamed "Crazy Saltwater Ralph", would likely mean us watching three or five random casts getting into Jason's way and getting picked off in a gruesome manner, with neither a line or a purpose other than lambs for slaughter. Lead casts did no better, especially for our disappointing excuse of a lead female as she barely done anything to prove her worth to survive and yet we are supposed to root for this sad sap. Same goes to her lover; sure he kissed her and made out with her even if Jason is hot on their tail, but other than that? Nothing.

But, as much as these bombardment of plot holes can be distracting, how much the casts are so one-dimensional, and how the kills would have been better (MPAA, I'm starting to hate you more and more), Jason Takes Manhattan still got me with its cheesy charms. People can hate it as much as they want but I can still enjoy this one if I switch my brain off, the only way one can enjoy a movie this silly and rushed. In the end, all that will matter is that Jason's back, walking, stalking and taking names, no matter how off-the-wall the idea is. And with Kane Hodder back behind the mask and a new set of kills that's pure eye candy for any fan (guitar braining? blocks being knocked off? hot sauna rocks shoved to chests? damn, and they said MPAA cut the good stuffs!), Jason is just as menacing of a zombie hulk as he is. Though, his refusal to do a scene where Jason kicks a dog did come as a shock for me! Who knew? Jason has a soft spot for domestic animals!

Jason in New York? Heck, if I can stand and enjoy Jason X with a kiddy-like glee on my face, I'm sure I can watch and survive this. Just as Jason somehow survive being melted by toxic waste!

Speaking of which, Toxic waste? In New York? ...How?

Bodycount:
1 male gutted with speargun
1 female stabbed on the chest with a spear
1 female had her head bashed open with electric guitar
1 male gets a hot sauna rock to the chest
1 female stabbed to death with glass shards
1 male gets a harpoon impaled to his back
1 male had his neck cut with machete
1 female strangled to death
1 male shot by accident
1 male thrown to control panel, electrocuted
1 male thrown and impaled to deck posts
1 male found with an axe on this back
30+ students left for dead in a burning and sinking boat
1 male ran through the beck with a syringe
1 male had his head bashed and scalded against steam pipe
1 male had his head punched off
1 female immolated in car explosion
1 male drowned in a barrel of toxic waste(!)
1 male brained with wrench
total: 49+
Posted by Kaijinu at 6:29 AM