Return of the Gatlin Babies: Children of the Corn II: The Final Sacrifice (1992) 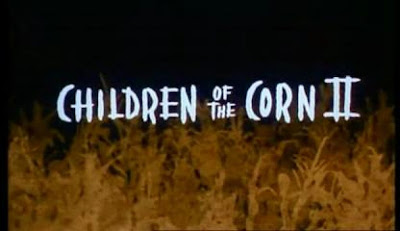 Personally, this has to be the one of the stranger entries to the whole film series, even way stranger than my fave entry (Part 4: The Gathering) but nowhere as mind-fucking as the likes of Part 5: Fields of Terror.

Continuing a few days after the events of the first film, the children of Gatlin, Nebraska are now placed under the care of willing foster parents from a nearby town, Hemingford . Coming into the scene is one Josh Garret (Terence Knox), a tabloid reporter who's driving home to meet and pick up with his son, Danny (Paul Scherrer), in hopes of reconciliation after leaving him and his mum. Taking a detour, Josh found out what had happened in Gaitlin, the town's little dark incident intriguing him and pushing his journalistic buttons on the right places.

In Hemingford, he and Danny befriends a local, Angela, who taken them into her home, with her adopted Gatlin boy Micah (Ryan Bollman), one of the previous followers of He Who Walks Behind The Rows. Having a dodgy relationship with his father, Danny make friends with Micah, as well as with a local girl Lacy whom he had taken a liking to almost immediately. But when the demonic entity returns and possessed Micah, a new army of murderous tykes are formed and they're hellbent on returning to their old roots, influencing Danny to join. Can Josh save his son from the evils of the cult and, with the help of a wise Native American, can he also succeed in stopping the children with their plan?

Final Sacrifice is one step away from being a mediocre low-budget 90s horror but somehow found a few cracks to throw in some interesting ideas that either worked or left as a red herring. For one, the attempt to normalize the child cult had its good run, putting the adults into a false sense of safety as they believe the parent-i-cide wouldn't happen again. With the over-religious tone of the first Children of the Corn gone, this would eventually lead to a more supernatural-fueled stalk and kill scenes that gradually put an end to a number of adults, one at a time, ranging from the simple knife attack to something as brutal as a voodoo doll fueled mutilation. (The latter being a memorable one.)

There was also an attempt to explain the origin of the Child cult being a part of some Native American folklore, where the adults had abused their children into doing their work as farmers, causing them to rebel and kill. Though the ending implied or suggested this to have some bit of truth, it's never fully grasped and it's forgotten all through out in the following sequels. Added in even was some scientific ho-haa concerning molds growing on corn and its spores might be causing this whole corn cult hysteria at the near end, which is obviously another red herring as we all know, for this series, science is He Who Walks Behind the Rows' bitch, thus making me wonder what exactly was that for?

The finale of the flick was also a weak one; not as bad as the some of the worse entries in this franchise had but it was dull and uninspired nevertheless. It had Ryan Bollman as the new child cult leader shouting lame god-evoking lines and thunders, only to be killed easily by combine harvester; I kinda find this a tad mean-spirited since at the beginning, he's actually warming up to be normal if it wasn't for the damn corn god possessing him and starting the whole cult thing again. Hence, he got killed for doing shit he doesn't even wanna do and everybody didn't give a bat's eye on that. Least the final shot in the movie makes up for everything.

Still, the silly romp all in all proved to be a fun ride. It had all the guilty presence of a 90s slasher, which is mostly tried-to-be-smart-and-aware rehashes of the basic 80s set-up. It strayed a little from the Stephen King short inspired cult hit and, honestly, a pretty pointless sequel, but in terms of its own turf, it still deliver the goods behind the cheesy script, cheap look and the still unexplained nature of the entity "He Who Walks Behind The Rows". (God, that name's a mouthful!) With good kills, a decent score and a misleading title, The Final Sacrifce could pass as a late night romp perfect with a microwave and a bag of popcorn.

Bodycount:
1 male had his neck slashed by vine
1 male impaled on the neck with a corn stalk
1 elderly female crushed underneath her own house
1 male face mutilated via voodoo doll
1 male stabbed to death with syringes and a kitchen knife
1 wheel-chair bound elderly female hit by a truck
21 adults burned to death inside a chapel
1 male shot on the gut with arrow
1 male impaled on a thrown spear
1 male shredded alive through a combine harvester
total: 30
Posted by Kaijinu at 2:47 PM