If Only They Clowned Around More: Terror on Tour (1980) 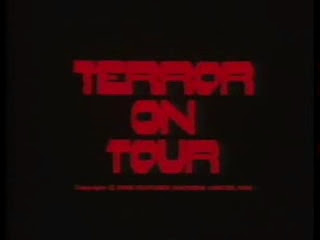 Being a fan of the band KIZZ, I was drawn into trying this movie hoping I'll be getting a rockin' good time, but instead I was a hairline away from ramming a working powerdrill into my forehead in hopes of lobotomizing myself from ever experiencing or even remembering this shit hole. 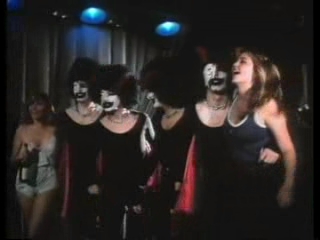 A rock band known as The Clowns (whose members dress in black leotards and face paint masks resembling gothic clowns ala KIZZ) find themselves as possible suspects for a series of murders happening off stage, perpetrated by an individual who happens to be wearing the same get-up as they do. Seeing they are well known for their onstage gimmick of pretend-killing people, as well as the fact that all of the victims so far are connected to them (and by connected, I meant the victims were their drug dealers and some hookers they played nasty with), it's not hard for the authorities to picture them responsible for the crimes, but even with these deaths, none of the members appear to be that fazed by the accusations. When more bodies start to drop like flies, the cops have no choice but ask an ex-junkie to, in return of her freedom, pose as a Clowns groupie and round out their culprit.

Sadly, any hope of a decent rock'n roll whodunit was ruined by the film's awful sound, bad lighting and lack of interesting bits. Seriously, I am never fond of drugs, drags and drunks, and these things appear to be the only things this movie's willing to brag about, thus the dull attempt to make us guess who the killer is in the midst of it all stales way too quickly, losing my interest and pretty much telling myself "Who gives a damn?"
To make matters duller, the kills aren't even that good. Not because they're just knife kills, but any attempt to build tension just doesn't work and the killer looks too silly to be threatening. Clown killers are good, but a clown in black tights and disco shoes? Heck, why not just go prance around naked? That nudie killer from 10 To Midnight pulled it off! (Or not. One nudie killer is enough.) 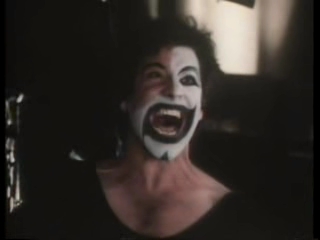 Ultimately, the ending calls for a good twist and, well, while it is a twist, I'm a tad confused who the heck the hack was but judging from what I feel about this whole movie, I don't really care and I'm just glad it's over. Terror on Tour almost had it as at least a so-bad-it's-tolerable piece, but a few missed shots pay a lot of price as you can see, so unless it finds a way to improve itself (I dunno, remake?), I rather drink to real rock-and-roll slashers like Rocktober Blood (1984) or even the slasher-supernatural hybrid antics of Trick or Treat (1986).