Before it was Freddy, it was Carrie: Friday the 13th Part VII: The New Blood 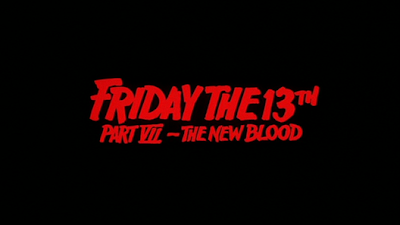 Ten years after Jason returned from the grave and terrorized Camp Crystal Lake, one Tina Shepherd returns to her old home nearby said lake to undergo a treatment that will help her maintain a force she cannot control.

You see, Tina isn't normal like any other teens girls; no, she's gifted with the ability to move objects with her thoughts and see any impending danger. But due to her being traumatized after she accidentally killed her father with it, her doctor (whose interest in aiding her is just a ruse to exploit her powers) insists her mother to go back to the place it all began so he can "help" her over come it.

Stressed by her guilt and her doctor's persistence to study her powers, Tina accidentally unleashed the chain-bound Jason, waking back to another round of bloodshed and mutilation, much to the distress of the partying teen occupants of a nearby cabin.

As Jason began to make ribbons out of them and anybody else he can get his grimy hands on, Tina has no choice but to stop the monster she unleashed, but can her powers alone stop the undead menace?

What was supposed to be the early version of Freddy vs Jason dropped early after countless disputes, The New Blood became the Friday the 13th entry that went further into stranger tides, pitting Jason against a lead that's more than normal, often dubbed "Jason vs Carrie". It's also best remembered as the first of the four films to use Kane Hodder, the main man and stunt man behind Jason Voorhees and the guy most Friday fans clamor about.

Just as Jason Lives brought a whole new Jason into the killing grounds, reviving and turning him into a zombie hulk to save a franchise with cheese and rock and roll violence, The New Blood made him even more of a revenant and a juggernaut, showing how much damage he can survive and brush off from anybody's hands that apparently that includes a psychic teen girl with much gusto and expressive body language.

As the fist half hour run was your standard stalk and kill methodics with a slow start leading to a fast pace kill-a-thon, the last twenty minutes features the very showdown that defines the entry. I recall seeing this movie when I was five and I didn't think much of the special effects. My simple little brain was more focused on the boogieman I'm seeing right in front of me, but when I was a little older, and in high school, the psychic fight between Tina and Jason was one of the best I've seen, with this perhaps the one Friday film to boast that much special effects and stunts imaginable, making the fight impressive and satisfying.

The plot is pure B-slasher material; from the stereotyped characters to the paint-by-number formulaic cliches, what made New Blood stand out further was the script and direction on the lead's character as a girl with a troubled past and a sense of hate for her own special gift, though Lar Park-Lincoln's portrayal maybe too weepy for some and her daddy issues can be pretty annoying at times. The rest of the cast, in turn, watered down to just meat, with a record of two douches in one single serving, but that doesn't stop them from uttering some of the best dialogue to chuckle its crowd. (A date with a soap with a rope? Sounds real sad, bub.)

Now, when it comes to Jason doing what he does best, from simple beheadings and kitchen knife stabbings to facial axe split and the now infamous sleeping bag kill, the murders of New Blood had lessen its count but instead focused on building tension, paving enough thrills and chills for any fan of the series. Though, like most Friday films, the MPAA got theirs chance dim down some of the violence and castrate this film of its full gory glory. (Dr. Cruise was supposed to be sliced in half and the sleeping bag kill was done five times). Still, if it had a guys having their heads crushed down with nothing more than Jason's bare hands, these dry kills wouldn't be all that bad. Heck, it wouldn't mean squat to true fans of series or, of slashers in general.

It also let go of the campy feel get-goings of the previous entry and gone back to the grim and semi-serious mood of the earlier franchises, but as far as I'm concerned, the series had gone so far that Jason is no longer scary and had us rooting for him, with a tired formula that had us predicting the final girl's win in the end as a typical Friday storyline so it's no use for us feeling scared for her. (or her sudden love interest. Man, these guys sure fall in love real quick!)

As a whole, New Blood is still a pretty solid entry; the psychic angle was a welcomed breath of fresh air but in the end, it's all about Jason, his lovable killings and all the little things we love about them.

Bodycount:
1 male drowned in the lake after dock collapses underneath him
1 female gets a tent spike to the neck, impaled to a tree
1 male gets a tent spike thrown into his back
1 male punched through his chest, neck broken
1 female slammed against a tree in her sleeping bag
1 male had his face split open with an axe
1 female pulled underwater, drowned
1 female sickled through the neck
1 male had his head crushed
1 female gets a party horn to the eye
1 male gets a butcher knife to the gut, later found decapitated
1 male decapitated with a machete
1 female thrown through a window, lands on a car
1 female impaled through chest from behind with brush hook
1 male disemboweled with tree-trimming saw
1 female axed on the face
total: 16
Posted by Kaijinu at 6:23 AM