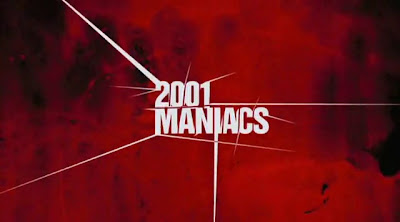 Well, better be truthful about it now than never: I love 2001 Maniacs more than Two Thousand Maniacs!

Don't get me wrong, the Lewis classic is pure campy fun in all is cheesiness that's right on easy on the gut, but this Tim Sullivan directed shlock had me going in everything from gore, humor and political incorrectness.

After taking a detour through the woods, three college troublemakers headed for Spring break ends up in Pleasant Valley, a small town seemingly made up of Deep Southern folks, where Mayor Buckman (holy crap, Robert Englund!) welcomes the them to their annual "Guts and Glory Jubilee", a celebration in remembrance of the time the Civil war had ended. Joining the trio is another car load of party seeking teens, and a motorbike riding African American-Chinese biker couple.

Deciding to stay for the food, drinks, hospitality, celebrating cultural tolerance and the sweet asses, the group soon finds that the people of Pleasant Valley are all but full of smiles. Until that is, one of them disappears. And then another. All of which brutally murdered in horrifying fashion. It wasn't long until the remaining few realizes that the town is maddened with vengeance, and they're planning to end their Jubilee with a feast or two, with them on the menu.

Generally routine, 2001 Maniacs doesn't look much other than another cheap and simple dead teenager slasher film. True enough, gore is glory as the kills goes with a sizable number of victims to slaughter in one crazy way to another, but it does what it's made to do and that is to entertain.

It's corny, easy to eat plot could have been thinner, but with the mountainous amount of splatstick humor and grue filling in some meat to the bone, and too some politically incorrect debauchery and colorful (and cartoonish) Southern folks, the film does stand out as its own movie, even if it had the same tone and spirit of the 60s original. Adding to the fun, too, is the quick pacing that leaves no, or at least not much, draggy moments for let-ups, a catchy score that is met with good laughs and cheesy atmosphere (plus the Rock-and-Roll remix of the original movie's theme song could have been the catchiest tune about the South, Evuh!), and yes, the good run for casting Robert Englund as Mayor Buckman, whose stellar performance reflects how much fun he's having in this little role and how entertaining he had made the character.

2001 Maniacs, to simply put it, is made with excessive violence mixed with absurdity for simple delight and munchable viscera for any horror fan. While not many will get it, those who can appreciate a good reboot without thinking much of the films they try to re-capture can have a good time with this one, but if you're easily offended by cheap exploitation, hick jokes or "remakes" in general, then maybe yer visiting this small town all for the wrong reasons, sonny!

Bodycount:
1 male brained with crowbar (dream)
1 cat had its neck crushed with noose
1 female torn limbless by horses
1 male disembowled after being force fed with acid
1 female crushed with a dropped bell
1 male skewered with spear
1 male had his groin chewed off, killed
1 male crushed in a wine press until eyes popped out
1 male and 1 female drives through barbwire, decapitated
Total: 10
Posted by Kaijinu at 7:30 PM