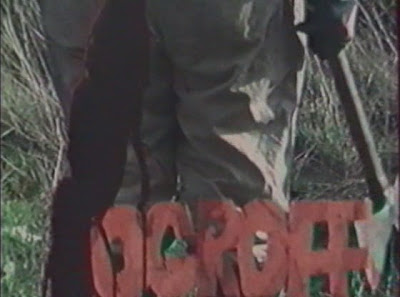 Riddle me this, my dear ole' friends; Who the fuck cares of Ogroff and his silly ends?

It's nice to see France embracing the slasher love as early as the 80s. It's just so awful that it had to suck this bad; Ogroff, or in its English title, Mad Mutilator, is a cheap, shot-on-video cult classic of sorts for the wrong and, God be damned, hilarious reasons.

It start off in a semi-good-semi-bad way as our title killer hacks a bloody axe into the chest of a young boy who just wandered off too far from his parent's broken car. Then comes dad, decapitated into a cheap paper mache' head and then mum is chased through the countryside until she is murdered. (I'll be frank, that felt like an eternity!)

To make it any worse, he's also not the only boogieman in the woods. I could go on and keep the surprise fresh for you but, hell, why screw around: there's zombies underneath his fucking hut!

Yes, in an unsuspecting turn, one of Ogroff's surviving victims unwillingly unleashed a horde of zombies who began terrorizing a nearby town. (Or they at least appear to be terrorizing) leading Ogroff to run for dear life on a motorcycle while still wearing his mask no less.

The film concludes with the surviving victims getting killed by random psycho but in the end, who the fuck cares? I certainly don't, and frankly, I believed I just stumbled upon an hour and twenty minutes of yard work-worthy film-making which got hold of its own army of fans for reasons inexplicably twisted.


This is normally the part when I ask why? Why would anyone be a fan of this film? Is it because Ogroff is such a charming boogieman? I don't see it! Especially with a mask that cheap and desperate, and his attempt to romance a victims is anything but romantic or horrifying. Ogroff is just hilariously sad and goofy.

There's barely anything to like about Ogroff, both the titular killer and the movie itself; the gore effects are cheap and there's barely any script. In fact, I don't need subtitles to understand the French, cuz I think there's only ten or fifteen lines spewed out and the body language pretty much handled everything. But lacking plot and dialogue, Ogroff ended up feeling like a three hour run of repeated stock footage of zombies crawling out of the ground and a ten-mile marathon run escaping our masked loonie. 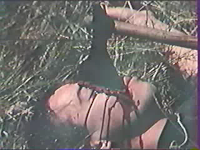 It'll take more than masks and kills to make me love a cheap effort; for me, it has to have style, limit and, well, pizzazz! The only time I'm gonna call Ogroff a "hit" is when I could add an "s" on the beginning!

Am I being too personal? maybe. yes. I dunno. I went to watch this out of seeing the fuss about it, but seeing what it is capable of, which is little, I'm very disappointed. I just hope I won't be going through the same fuss all over again- oh wait, there's no guarantee...*BLEEP*!