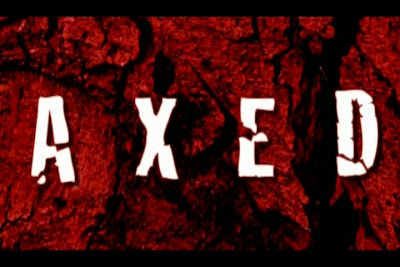 Lurking around this movie's own low-budget is a wholesomely entertaining hodgepodge of killer parents, psycho-drama and backwoods slasher. 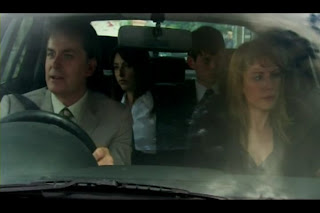 When business man Kurt Wendell (Jonathan Hansler) lost his job, the strict father watches as his family go on with their daily lives, silently slipping into insanity and blaming their flaws for his own troubles. One day, though, he finally snaps; seemingly deciding to loosen up, Kurt took his wife and children to a cottage miles away from civilization and gave them all a day off from work and school. But little do they know of his true intentions; a final "project" that involves his family, a bound man savagely beaten in the attic and a sharp axe...

Well acted and directed, Axed is a pleasant surprise for me; while the concept of a killer parent isn't exactly new, the pot boiler build-up of this movie had us watching a grueling situation escalate from a simple job loss into an uncontrolled spiral of secrets, betrayal and humiliation, practicing patriarchal terror as Hansler's character delivers an onslaught of personal attacks against his family and his ex-boss, both verbally, psychologically and physical, all the while testing our patience as well. 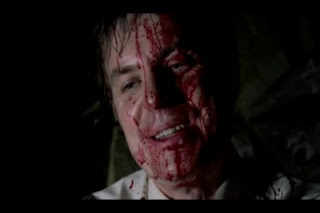 After a while, it shifts to the familiar grounds of backwoods stalk-and-slash as daddy finally lives up to the film's title and brandishes an axe as he chases what remains of his clan and anyone that got in the way. The chase scenes mostly involve two victims so it can be a tedious viewing, but the cinematography around it is very well shot and provided the same needed tension as of the earlier parts, leading to a very exhausting finale.

However, seeing that Axed is half and half thriller and slasher, the murders around this movie didn't pile up a lot and half of them are very tame kills. (I can tell it's half. There's only four kills) What did made them bearable was that these murders and attacks choose the right moments to happen and often tests character; one fine example was when Kurt strangles his own wife in front of his son, prompting him to fight back. He did but to no avail, though this later gave his son the motivation to man up in the end and gave it all to save what remains of his family.

From that scene alone, the movie is in theme with personal changes and motives as Kurt devolves into a self-justifying loon who blames his motive from his failures as a father and husband, while his children learned to better themselves and tries to find a way to live through the ordeal. It took a lot of family drama mixing with pure horror to pull this one off and, while it can be slow in some acts, it's all worth it to make an effort of a film and that includes an amazing cast of five...or six if yer gonna include that random character that popped up just for the sake of bodycount. 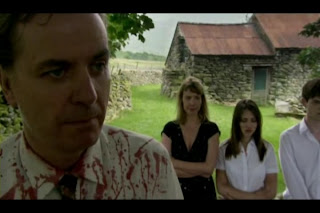 So if you managed to catch this one, I really recommend this if you're looking for a good killer parent flick. Nothing very deep, but entertaining nonetheless.